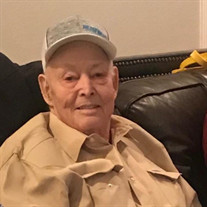 Aaron Lee Couch Jr., better known as Sonny, departed this earthly life and was greeted by his Lord and Savior on August 24, 2021. He was a loving brother, uncle, and friend to many, but most of all, he was an adoring and devoted husband. Sonny was born in Kaufman, Texas in 1936 to Adean and Aaron Couch Sr. He was the oldest of four children. Growing up surrounded by the land that he loved, he developed an admiration for the dairy business, horses, and the cowboy way of life. In 1956, he found himself falling in love with his best friend’s sister, Marcadia. The couple’s first date was to the State Fair of Texas, and 52 days later they were married after he proposed at the Cinderella drive in. The couple’s fairytale continued, and they were blessed with 65 years of marriage. Over the years, Sonny worked for various dairies until the couple opened their own dairy in Sulphur Bluff, Texas. After retiring from the dairy business, Sonny continued to bale hay and care for his wife. Even in his last days, his primary concern was for her wellbeing. During their remarkable 65 years of marriage, Marcadia and Sonny never had children of their own, but that did not keep them from deeply investing into the lives of their many nieces and nephews. Their farm also became home to many of them over the years with Sonny teaching the kids life skills such as operating the dairy farm, roping, and riding horses. A man full of character and colorful stories, he will always be remembered for the many family trail rides and spur of the moment weekend trips. Sonny was very intuitive, intelligent, humble, wise, and selfless. His smile and laid-back demeanor were always a calming and welcoming presence to all. Preceded in death by his parents, Adean and Aaron Lee Couch Sr., brother, Bill Couch, brother-in-law, Melton Webb Sr., and nephew Shawn Couch. Sonny is survived by his beautiful wife, Marcadia Couch, brother, Johnny Couch and wife Patsy, sister, Fay Redmon, and sister-in-law, Connie Webb. Also cherishing his memory are nieces and nephews Melton Webb Jr., Terry Webb, Julie and Bubba Davis, Billy Couch, Mark and Donita Couch, Lori Graham, Louis and Mary Redmon, Sammy and Jennifer Redmon, Lawrence and Malisa Redmon, Dewayne and Susan Couch, Jamie and Simpson Rushing, and many great-nieces and nephews. Graveside services will be 11:00 a.m. Tuesday September 14, 2021 at Arbala Cemetery in Arbala, 3222 FM 1567 Sulphur Springs 75482 (Hopkins County) TX.

Aaron Lee Couch Jr., better known as Sonny, departed this earthly life and was greeted by his Lord and Savior on August 24, 2021. He was a loving brother, uncle, and friend to many, but most of all, he was an adoring and devoted husband. Sonny... View Obituary & Service Information

The family of Aaron "Sonny" Couch created this Life Tributes page to make it easy to share your memories.

Send flowers to the Couch family.