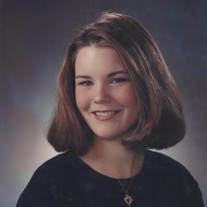 In a tiny hospital in Weatherford, Oklahoma, Addie Marie Densmore Jordan arrived on June 16, 1979. Two days later everyone in the medical facility was rushed to hallways and shelters as a tornado rapidly approached. This is how Addie's life eventually played out -- a story full of surprises and adventures that could not be conquered by any storm because of her strong spirit. Addie's dad's job took the Densmore family to Richardson, TX. when she was 18-months-old. This is where she would grow up, attending First Baptist Church Richardson. She would commit her life to Christ at the age of seven and later be active in the Heights Baptist Church youth group. She attended Canyon Creek Elementary and North Junior High School. In 1997 she graduated from J.J. Pearce High School in Richardson. Following high school, Addie attended Southwestern Oklahoma State University for two years, then completed her teaching degree at Texas A&M Commerce. In 1999, before Addie's college graduation, she was diagnosed with oligodendroglioma -- a type of brain cancer. She persevered and pursued her degree despite surgery, chemotherapy and seizures. Addie later taught at Faith Family Academy in Waxahachie, TX. and Kennedy Elementary School in Terrell, TX. In March of 2008, Addie was united with Andrew Jordan and on December 10, 2008 Harper Parks Jordan arrived with an equally adventurous spirit to match her mother's from 29 years earlier. Through multiple surgeries, chemotherapies, radiation treatments and medications Addie's spirit never failed. Never once did she ask, "Why me?" Throughout her life the Lord performed many miracles and put incredible doctors, nurses, medical staff and friends in her path. She was greatly blessed. On March 5, 2020, Addie went home with no more pain and sorrow. She leaves behind to cherish her memory her husband Andrew Jordan; daughter, Harper Parks Jordan; parents, Bob and Charletta Densmore; brother, Matthew Densmore and his children Emily and Grant Densmore as well as other extended family members and a host of friends, all of whom dearly loved her. A Celebration of Addie’s life will be at 1:00pm, Saturday, March 7, 2020 at First Baptist Church, 403 N. Catherine St, in Terrell. There will be a private interment for the family. The family requests that you consider making donations in memory of Addie's heroic fight and blessed life to: Baylor Neuro-Oncology Foundation, c/o Karen Fink, M.D., PhD, 3600 Gaston Ave., Suite 100, Dallas, Texas, 75246.

In a tiny hospital in Weatherford, Oklahoma, Addie Marie Densmore Jordan arrived on June 16, 1979. Two days later everyone in the medical facility was rushed to hallways and shelters as a tornado rapidly approached. This is how Addie's life... View Obituary & Service Information

The family of Addie Densmore Jordan created this Life Tributes page to make it easy to share your memories.

In a tiny hospital in Weatherford, Oklahoma, Addie Marie Densmore...

Send flowers to the Jordan family.