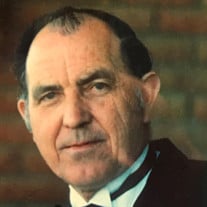 Alwayne "Wayne" Miller, passed away peacefully at home surrounded by his loving family on June 12, 2019. Wayne was born on June 26, 1932 to Conard & Nora Bell Freeman Miller in Mt. Pleasant, Texas. Wayne served his country with the U.S. Army and was drafted at the young age of twenty-one and was deployed as a Private First Class in the Korean War. After serving 2 years, Wayne was happy to return home to his family and said Korea was the coldest place he's ever been. Following his honorable discharge from the Army, Wayne worked for his uncle who owned a landscaping company. He worked by day and at night attended trade school to become a machinist which enabled him to begin his career. He worked for Squibb Taylor/Fittings Valve & Controls as a plant superintendent for 21 years and then moved on to Industrial Woodworking Group. Since retirement in 2002, Wayne loved to travel with his wife, gardening, dominoes, poker, grandchildren and great grands whom he loved dearly, fishing, watching his favorite teams (Texas Rangers and Dallas Cowboys) and enjoyed meeting the men for coffee at Whataburger. Wayne was known by several names, Mr. Miller, Alwayne, Wayne, Dad, Brother, Honey but most affectionately known as Papaw. Many a day you would see him driving his old red tractor with one of the grandkids or great grandkids perched on his lap enjoying the ride. If it wasn't the tractor, it was the riding lawn mower. Wayne's early years of landscaping followed him when he moved to Forney in 1976 with Sylvia, Lisa & Lori. His yard was a work of perfection with its lush, green lawn and beautiful flowers. Two flag poles graced the front of the property where the United States flag and Texas flag proudly waved. Wayne had a green thumb for gardening. Fresh produce was shared with all and hopefully you were one of the lucky recipients of his delicious tomatoes, okra, squash & cantaloupe. He loved the outdoors and the time spent outside gardening, tending the yard, restoring tractors and piddling in the "shed" (aka Man Cave). The shed was the place to be at all the family gatherings. Fourth of July's were celebrated large. Family and friends joined the festivities and Wayne looked forward to this event and splurged each year making sure there were plenty of fireworks for the kids. Every one was always welcome. Above all else, Wayne was a loving husband, father, grandfather & friend. He was hard working, honest, a kind and generous man who was devoted to his family, never met a stranger and had great pride in his country. He was baptized on July 29, 1949 at the First Baptist Church in Hillsboro, Texas. He was a Christian by faith and many a day you would find him in his favorite recliner reading his Bible. Wayne, a man that may be gone, though will never be forgotten. He is survived by his wife of 47 years, Sylvia Novak Miller, daughter Lori Compton Hoskins (Galveston), numerous nieces and nephews, 13 grandchildren, 13 great grandchildren, his sister Barbara Bench, extended family and many friends. He is preceded in death by his son, Larry Wayne Miller, daughter Lisa Searles Nichols, brothers Carl Jr. Miller, Teddy Miller & Waylon Miller, sisters Aline Nelson, Carlos Moore and Bobbie Nelson. A special thank you to Brother Jerry Griffin and his wife, Helen for being wonderful friends and neighbors since November 1976. Their friendship meant the world to Wayne. He certainly loved Helen's chocolate pies. Visitation will be held on Wednesday, June 26, 2019 from 1pm to 2pm, with the service beginning at 2pm at the First Baptist Church, Forney, Texas with Brother Jerry Griffin officiating. Interment will follow at Hillcrest Cemetery in Forney. Pallbearers are Wayne's grandsons, Nathan Miller, Jason Miller, Keaton Searles, Chase Griffin, Kyler Searles and Kohl Searles. Honorary pallbearers are Ned Bryant, Matt Bares and Danny Sanchez. Memorials may be made to the Hillcrest Cemetery Association at P.O. Box 1033 Forney, Tx 75126.

The family of Alwayne "Wayne" Miller created this Life Tributes page to make it easy to share your memories.