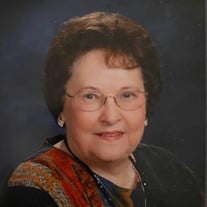 Audrey Delores Porter, 91, passed away December 17, 2021 with her granddaughter and niece at her side. She was born September 25, 1930, to Hildegarde Bolling Hallmark and Orby Hiram Hallmark in Waelder, Texas. Audrey was born three months premature and weighed 1.5 pounds, and family and neighbors cared for the newborn who slept in a shoe box. She was a tom boy as a child and rode her horse, named Pet, all around town with her pigtails flying while her sister, Jeannine, took to playing the piano and sewing. Younger brother, David, who was 9 years younger, was wagged around by his older sisters. Audrey attended Waelder schools where she graduated as valedictorian of her Class of 1948. She was very active in high school participating in student council, volleyball, softball, annual staff, pep squad leader, class president, captain of the girl’s basketball team and choral club. Audrey went to Texas Lutheran College in Seguin as a business major and went on to work at the Alcohol, Tobacco, and Firearms (ATF) in Austin as a secretary. She met her lifelong sweetheart in high school, Marion Porter, and embarked on a 70-year love story. Together, they were named the most likely to succeed in the high school year book. Marion would hitchhike from College Station to Austin on weekends to see her. They married in 1951 and to this union were born Constance, Mark, and Judie. Audrey and Marion moved to Stephenville in 1953 and lived there for 21 years. They made lifelong friendships in Stephenville while raising their family. While in Stephenville, Mom was active in the Jaycee wives, her sorority and she and Porter were in dance club. In 1974, Audrey, Marion and Judie moved to Terrell. Along side her husband, Audrey served and loved her Terrell community until her death. She pledged Beta Sigma Phi, Theta Phi Chapter, in November 1975, serving as President from 1979 to 1980 and recording secretary for several years. She loved her sorority sisters and enjoyed their love and friendship to the end. Audrey was an avid tennis player, winning many matches and tournaments. She learned to play bridge in college and she and her close-knit group of friends, played twice a month on Wednesday. Everything in life was planned around her Wednesday bridge game and her Friday Lavender Beauty Shop appointment where she and her friends enjoyed recapping their previous weeks adventures. Audrey and her sister, Jeannine, enjoyed book club every month until Jeannine passed. She was in the Rebekah Sunday School Class at First Baptist Church and looked forward to the visits and phone calls from Charlotte Christenberry when she and Daddy could no longer attend. Audrey loved a good celebration and would turn a simple occasion into a full blown party. She was known for her poetry writing and her friends came to expect a poem in their birthday cards from her. She also loved music. Her favorites artists were Willie Nelson, Ray Price, Elvis, Patsy Cline, Ray Charles, and Jerry Lee Lewis. She indulged in sweets with donuts being her favorite. More than anything, Audrey was a giver and expressed her generosity to everyone she met. Audrey is survived by her children and children’s spouses: Constance and John Wooley, Mark and Dale Porter, and Judie Porter; as well as her grandchildren: John Paxton Wooley, Jamie Wooley, Marcus Wayne Wooley, Crystal Nicole Porter, Laura Danielle Porter, and Haley Elise Porter; and her great grandchildren Madison Lea, 16, Lawrence Gray, 11, and Mac William age 7 as well as several extended family, loving church family and countless friends made by Audrey during her incredible life. Visitation with Audrey’s family will be at the First Baptist Church in Terrell on Tuesday, December 21 at 1:00pm with her funeral to immediately follow at 2:00pm in the church sanctuary. In true Audrey fashion, coffee with punch and cookies will be served following the service in the Pastor’s Reception Room. Donations in her memory may be made to the FBC Homebound Senior Adult Ministry, 403 N. Catherine, Terrell, 75160 to serve others who are not physically able to attend church yet still enjoy the fellowship.. Graveside services will be held at 11:00am, Saturday, January 15, 2022 at Masonic Cemetery in Waelder, Texas, with immediate and extended family.

Audrey Delores Porter, 91, passed away December 17, 2021 with her granddaughter and niece at her side. She was born September 25, 1930, to Hildegarde Bolling Hallmark and Orby Hiram Hallmark in Waelder, Texas. Audrey was born three months premature... View Obituary & Service Information

The family of Audrey Porter created this Life Tributes page to make it easy to share your memories.

Send flowers to the Porter family.