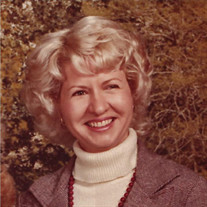 Barbara Jean Bratcher, former Rockwall and Wills Point resident, passed away peacefully on Oct. 6, 2021. Barbara was born on May 11, 1943 in Paducah, Ky, raised by Ed Stauffer (stepdad) and Margaret Judd Stauffer, both of whom preceded her in death along with a sister, Elaine Johnson. On Aug. 31, 1962, she married Wayne Bratcher in Lubbock, Tx and a year later moved to Garland. Barbara commuted to TWU and later to East Texas State College pursuing her profession with GISD for nine years, teaching art at South Garland High School and subsequently as Librarian at Coyle Middle School in Rowlett. Then, she moved with husband Wayne to El Paso working for EPISD as Librarian at Charles Middle School and served as secretary and then president of the local branch of ATPE (teacher's union). After four years, they moved to Brashear, Tx and Barbara began full-time raising cutting horses and cows. In 2002, they moved to Wills Point and later to Rockwall. She was an artist, photographer and loved teaching, particularly as Librarian, continuously challenging her students to excel. Secondarily, she was totally into her horses (showing a yearling stallion that she raised) along with the replacement heifers for local dairies. She is survived by her husband, Wayne Bratcher; daughter: Pam Fleetwood and husband, Robert; sisters: Jenny Buchanan; Becky Wells and husband, Jack; brothers: Jim Stauffer and wife, Carole; Jack Stauffer; grandchildren: Lauren Gabriel and husband, Jayson; Wes Fleetwood; Kenneth Fleetwood; great-grandchildren: Presley and Brantley Gabriel. A celebration of her life will be at 2:00pm, Wednesday, Oct. 27, 2021 at Max Slayton Funeral Chapel.

Barbara Jean Bratcher, former Rockwall and Wills Point resident, passed away peacefully on Oct. 6, 2021. Barbara was born on May 11, 1943 in Paducah, Ky, raised by Ed Stauffer (stepdad) and Margaret Judd Stauffer, both of whom preceded her in... View Obituary & Service Information

The family of Barbara Jean Bratcher created this Life Tributes page to make it easy to share your memories.

Send flowers to the Bratcher family.