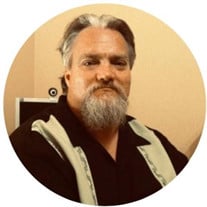 Barton Shannon Hickey, known by those closest to him as Bubba was born in Peryton, Texas on October 14, 1964, to William R and Daniella S Hickey and passed away October 30, 2021. He was the second of 4 children. He spent many years in Forney, Texas where he attended and came to know Christ, for the first time, at the little white frame church, Fellowship Baptist. He tried his hand at bull riding but one ride/buck off quickly changed his mind. He was part of the FFA and raised rabbits. He and his siblings enjoyed riding his parent’s horses. A little know fact is that Bart worked as part of the crew behind the scenes of the TV series Dallas as a teen on a ranch in Forney. Who knows, he may have been a star. He graduated high school in Bossier City, Louisiana and immediately after graduation entered the Marine Corps, where he served for 6 years. Most of which was overseas. He was a member of the 79th American Legion in Riverside, California. He lived several years in Portland, Oregon. Bart moved back to Texas in 2011 where he met his wife, Mary who he married in February of 2012. Some of his greatest joys were having a part of raising AnnaMarie Jones, his step-daughter, as well as the time he got to spend with Jarod Moody, his step-grandson. Christina Wilson held a special place in his heart as they shared similar struggles. There are many children that he had direct contact with that considered him a big teddy bear. He may have been big and burly, but the kids loved to snuggle up to him. Over the years Bart did his greatest service through the Men’s Ministry at Fellowship Baptist Church. Steve Hatfield knew he could count on Bart to assist in the kitchen at any meal the men worked. His greatest passion was being an encourager to other men who were struggling like him. Men knew that Bubba would answer the phone any hour of the day or night. Until recently, he served in Celebrate Recovery. He truly believed that this program was God ordained as it points one to the true healer, Jesus Christ. He also served in the Children’s Ministry with his wife. They taught the 4-year-old Sunday School class. Bart also was part of the after school tutoring program as cook and a listener in Awana. What a joy it was for him to hear children quoting scripture. He was looking forward to how God was going to use him at Cornerstone Reformed Baptist Church. Bart was preceded in death by his father, William R Hickey and both sisters Shelly Rierson and Billissa Hickey. He is survived by his wife Mary Hickey, his mother Daniella S Hickey and his brother Steven Hickey as well as many nieces and nephews. Bart loved his entire family unconditionally. He never turned down an opportunity to try to steer them in the direction of Christ. He was so adamant about it because that is where he found peace in the midst of all the storms in his life. There are so many people that played a huge part in Bart's life. Your name may not be mentioned here but you know who you are. He was thankful for what each of you had to offer him, whether it be a good hard talking to, words of encouragement and those occasional pats on the back that we all need. He loved every one of you! Funeral service will be at 11:00am, Monday, November 8, 2021 at Cornerstone Baptist Church with family receiving friends beginning at 10:00am. Interment will be at 1:00pm, Tuesday, November 16, 2021 at Dallas/Ft. Worth National Cemetery.

Barton Shannon Hickey, known by those closest to him as Bubba was born in Peryton, Texas on October 14, 1964, to William R and Daniella S Hickey and passed away October 30, 2021. He was the second of 4 children. He spent many years in Forney,... View Obituary & Service Information

The family of Barton Shannon Hickey created this Life Tributes page to make it easy to share your memories.

Barton Shannon Hickey, known by those closest to him as Bubba...

Send flowers to the Hickey family.