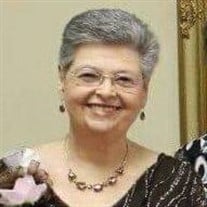 Betty Louise Mince Daniel was born August 27, 1941 to Jimmie and Prudy Mince at Whitton in Van Zandt County, Texas and went to be with her Lord and Savior on January 6, 2021. She attended school at Mono at Elm Grove thru the 4th grade then transferred to Mabank Schools for the balance of her school years, graduating in 1958. Then she then attended Henderson County Junior College in Athens, TX, known today as Trinity Valley Community College. She started working at Lone Star Gas Company in 1959. While working there she met Roy Dean Daniel at a church service. There was an all-women’s choir singing that night which were missing an alto and tenor part. Betty and Roy filled in and actually sang together the first night they met. They were married December 17, 1960 and singing was a major part of their lives. They lived in Dallas until January 1962 then moved to Kemp where they took over the duty of Youth Leader at First Assembly of God Church. Betty and Roy were blessed with two daughters, Kimberly Dawn and Lisa DeAnne. In 1972 they moved to Kaufman to help with the youth at First Assembly. Betty worked for several companies while living in Kaufman. She worked for Tijerina Enterprises, Biven Concrete and T & T Plumbing. She also worked over 25 years for D. G. Council Real Estate. Betty lived in Kaufman for 47 years until she moved with Lisa and her family to Forney, in 2018. She is preceded in death by her husband Roy, her daughter Kim, her parents, and her brothers Jimmy Mince, Jr. and Jack B. Mince. She leaves behind her daughter, Lisa Jacobs and husband, Vaughn, sister-in-law, Rochelle Mince, grandchildren, Garrett Jacobs, Jonathan Jacobs, Jacey Jacobs, Jeremy Jacobs, and Cassie Jacobs and bonus grandson Manuel Mejia. Also three nieces and their families, Debbie Caten, of Tucson, AZ, Kathy Sloan of Lawton, Oklahoma and Le Anne Brazeal of Plano, Texas plus many great nieces and nephews. A Celebration of Betty's life will be at 11:00am, Saturday, January 30, 2021 at Max Slayton Funeral Chapel with Rev. Don Bell and Rev. Jerry Groom officiating.

Betty Louise Mince Daniel was born August 27, 1941 to Jimmie and Prudy Mince at Whitton in Van Zandt County, Texas and went to be with her Lord and Savior on January 6, 2021. She attended school at Mono at Elm Grove thru the 4th grade then... View Obituary & Service Information

The family of Betty Louise Daniel created this Life Tributes page to make it easy to share your memories.

Send flowers to the Daniel family.