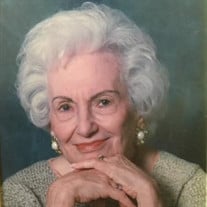 Betty Jo Merrell went to Heaven at 3:20am on January 21, 2019 while in the loving comfort of the home of Dan and Debbie Merrell of Franklin, TN. After battling Alzheimer&#8217;s for nine years, Betty stopped swallowing food or drinking water... View Obituary & Service Information

The family of Betty Jo Merrell created this Life Tributes page to make it easy to share your memories.

Send flowers to the Merrell family.