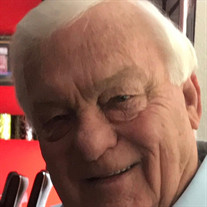 Bill Baker passed away June 25, 2020 in Dallas. Bill was born May 16, 1945 in Carthage Texas, to the late Arthur Lee and Julia Margaret Dean Baker. He was preceded in death by his parents, sister Anne Hammer and brothers: Robert Baker, James Baker and Tommy Baker. He graduated from Marshall High School in 1963 where he was an All-American athlete, earning a Football Scholarship to Austin College in Sherman. Bill was also an accomplished athlete in other sports and was selected as All-American in both basketball and track. Bill met the love of his life, Kathy, through a mutual friend in May of 1987, and in November 1993, they were married at the office of Justice of the Peace, Ken Blackington, in Mesquite. His mom Julia, older brother, Robert, and Robert's wife, Faye, were in attendance. After the ceremony, Bill and Kathy went to Lake Tahoe for their honeymoon. The first of many trips they would take in their life together. Bill moved to Terrell in 1985 and became very active in Kaufman County, serving as Kaufman County Republican Chair for 7 years, where he was integral in helping with numerous elections. He also served as Past President of Terrell Rotary Club, on the Terrell Planning and Zoning board and several charity organizations. He and his wife were also very involved in a Lake Pointe Church and Life Group. Bill had a successful career with the Teamsters. He eventually retired in 1995, as a business agent after 31 dedicated years and having earned the respect and trust of so many who had the chance to work alongside him. Bill was very involved with his family, always there to offer support and guidance whenever needed. He is survived by his wife Kathy Baker; children: Barbara Parlett and husband, David, Kimbrly Crawford, William Baker, Heather Conner and husband, Steven; grandchildren: Scott Crawford, William Parlett, Joseph Parlett and wife Madilyn, Joseph Langley, Cameron Conner, Nicholas Baker, Brody Conner, Blaze Baker and William Baker. Bill was the patriarch of the Baker family, with many nieces, nephews who loved and respected him and will miss him dearly, along with the many friends that he made during his lifetime of serving others. He leaves a legacy of strong faith, the belief in what is right and the hope for a better world. ****At the request of the family, services will now be private. There will be a Memorial Service scheduled for a later date. The family appreciates your understanding.**** In lieu of flowers the family asks memorials be made in Bills name to Pregnancy Resource Center www.yourpregnancycenter.org

Bill Baker passed away June 25, 2020 in Dallas. Bill was born May 16, 1945 in Carthage Texas, to the late Arthur Lee and Julia Margaret Dean Baker. He was preceded in death by his parents, sister Anne Hammer and brothers: Robert Baker, James... View Obituary & Service Information

The family of Bill Baker created this Life Tributes page to make it easy to share your memories.

Send flowers to the Baker family.