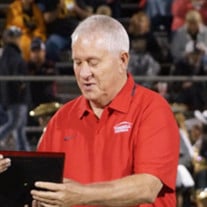 William E. “Bill” Griffin, beloved voice of the Fighting Terrell Tigers, passed away on the afternoon of March 24, 2019. Bill was born November 8, 1944 in Terrell to Ferrell Elon and Lena Kate (Hinton) Griffin both of whom preceded him in death along with his grandchildren, Coco Alexis and Ryder William Griffin. While saddened at Bill’s passing, his family takes great comfort in knowing Bill has picked Coco and Ryder up to play games and love on them until they are all united again in Heaven. Having been born and raised in Terrell, Bill had a front row seat to how the community has changed during his lifetime and how every person and every place in Terrell combined to make it the best place for all to live. He graduated from Terrell High School in 1964 and, during high school, Bill achieved both academic and athletic honors. He played any and every sport including football, baseball, basketball and ran track. His commitment to excellence and leading the team earned him the respect of his teammates, coaching staff as well as other players on competing teams. After graduation, Bill received a scholarship to attend University of Texas at El Paso (formerly known as Texas Western College). Bill returned to Terrell where he met Linda Gardner and they married on March 23, 1967. In 1966, his love of sports and knowledge of football plays enabled him to become the Voice of the Terrell Tiger football games. Bill’s ability to see the game in a clear way helped him communicate each play accurately and vibrantly. He not only was the announcer for Terrell football but also baseball and basketball for over 30 years. He had a love for youth sports and knew just how important these memories would be to the student athletes’ families and many times over the years, Bill would contact the coach of the teams to make sure he pronounced each player’s name correctly. (Many families would contact him personally to thank him for the time and care that he put into knowing details about their sons and daughters on the teams.). Bill’s civic pride in Terrell ran very deep and he served in many capacities so as to make sure that the growing community changed with the times but still kept its down-home feel. He served with the Terrell Junior Chamber (Jaycees) which helped him develop the knowledge base to serve with the Chamber of Commerce and City of Terrell Planning and Zoning Board. Bill was elected to the TISD School Board for 18 years where his insight and wisdom helped TISD change to fit the needs of students and educators on the growing campuses. He was instrumental in the success of the PAC being built to encourage artistic experiences, whether it be music, art or theatre, for the community and the students. His love for encouraging youth to be the best they can be helped Bill be an active volunteer with TARA baseball and the interim youth minister at First Christian Church. He and Linda made sure that every youth group member knew that Jesus loved them and that church was fun! Bill was the Chairman of the Boles Brothers Memorial Golf Classic for over 20 years where he helped fundraise to award many graduating THS seniors the necessary scholarships which would help them in their next chapter of life. Bill also was a volunteer with the American Cancer Society and was Past Master of Artesia Lodge No. 406 and member of Prairieville Lodge No. 253 and the many friendships he made with these organizations lasted for the rest of his life. In 2017, Bill was honored by the community of Terrell and TISD for his five decades of service at Tiger Memorial Stadium when they formally named the press box as the “Bill Griffin Press Box”. In 2018, in recognition of his many contributions to the sports that he played in high school, he was inducted to the Tiger Athletic Hall of Fame, an honor he truly cherished. Bill was also a small business owner in Terrell. In 1979, he and Linda took over Cherokee Printing and were celebrating their 40th year in business. Of all the accomplishments and accolades that Bill received and all the titles that he was awarded, Bill’s true achievement was being the best husband, dad and grandpa. Many weekends were spent with Linda and John at little league games, school functions as well as travel with John as John golfed in tournaments in high school and college where he was John’s biggest fan and supporter. When Bill became a grandpa, he found his true calling. Sophia and Gray had their grandpa wrapped completely around their little fingers and the sky was the limit when they asked for anything. He enjoyed weekends when he and Linda could travel to John’s house to visit with Sophie and Gray or when they had the wonderful chance to have them for the weekend in Terrell where Bill would proudly show all he knew that he had the prettiest and most handsome and smartest grandkids ever born! His devotion to his community was second only to his devotion to his family and he will be never forgotten for the powerful impact he made in so many lives. Bill leaves to cherish his memory his beloved wife of 52 years, Linda Griffin; treasured son, John Griffin, precious grandchildren: Sophia and Gray Griffin; sister, Pat Hottinger; brother, Greg Griffin and Karen as well as other extended family, a host of friends and a community who loved him dearly. A Celebration of Bill's life, service and legacy will be at 10:30am, Friday, March 29, 2019 at First Baptist Church of Terrell, 403 N. Catherine, Terrell. His family will receive friends 4-7pm, Thursday, March 28, 2019 at Max Slayton Funerals and Cremations. In lieu of flowers the family asks memorials be made in Bill's name to the Terrell Excellence Foundation T.I.S.D. 700 N. Catherine St. Terrell, Tx 75160 www.terrellexcellencefoundation.org

William E. &#8220;Bill&#8221; Griffin, beloved voice of the Fighting Terrell Tigers, passed away on the afternoon of March 24, 2019. Bill was born November 8, 1944 in Terrell to Ferrell Elon and Lena Kate (Hinton) Griffin both of whom preceded... View Obituary & Service Information

The family of Bill Griffin created this Life Tributes page to make it easy to share your memories.

Send flowers to the Griffin family.