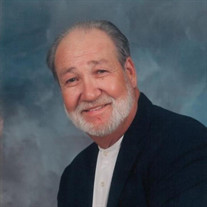 William “Bill” Shanz, of Terrell, passed away July 6, 2019. Bill was born in Natchitoches, LA on August 27, 1939 to George Ettler and Edith (Autrey) Shanz, both of whom preceded him in death along with his son, Michael Shanz. Bill worked at Aeromotive in Dallas for over 43 years as an aircraft mechanic where his proficiency in identifying repairs and improvements made him an invaluable colleague. Upon meeting him, the first thing everyone noticed about Bill was his big smile and fun sense of humor. He also loved the outdoors with camping and going RVing being a big part of his life. His adventurous personality helped make sure that wonderful memories were made with family and friends during the many trips they took. Bill also loved dancing and simple country living. He moved to the Poetry area 22 years ago to enjoy country sunsets and being in the open countryside. More than anything though, Bill loved his family. He cherished every moment with them and seeing his grandchildren and great grandchildren continue the legacy of honest and loyalty that he lived every day made his heart swell with love and pride. A great man who lived every day to the fullest, Bill will never be forgotten by all whose lives he touched. Bill is survived by his wife, Rebecca Shanz, of Terrell; daughter, Catherine Bauer and husband, John; 6 grandchildren, 12 great grandchildren; step-children: Faith Katherine Kerss, Jon Robert Kerss, Charles Kerss and Doug Kerss; his cousin who was more like a brother, William Autrey as well as many other extended family and friends who will miss him greatly. A Celebration of Bill’s life will be at 3:00pm, Sunday, July 14, 2019 at Max Slayton Funeral Chapel where the family invites all to share the many stories and memories of Bill. In lieu of flowers, they ask that donations be made to the American Kidney Foundation at www.kidney.org to continue the brave fight against kidney disease that so many others, alongside Bill, are still battling.

The family of Bill Shanz created this Life Tributes page to make it easy to share your memories.

Send flowers to the Shanz family.