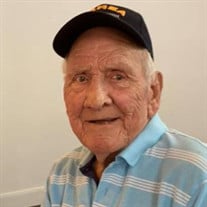 Funeral service will be 10:30 a.m., Thursday, January 14, 2021, at First Baptist Church of Terrell with interment to follow at Elmo Cemetery with military honors. Family will receive friends Wednesday, January 13, 2021, from 6:00 p.m. to 8:00 p.m. at Max Slayton Funerals and Cremations. Bill White, 88, of Elmo, Texas, went home to be with his Lord and Savior on January 8, 2021. Bill was born July 31, 1932 in Rockwall, Texas to L.D. and Maggie White. He willingly served his Country and was captured in Korea and became a Prisoner of War in the Korean War. He received several medals including the Purple Heart. Thankfully, he had a praying mother that knew only God could save him on that dark day that became light when he was rescued! His will power and story, will be one for the history books. He had a great love for his family. He was the foundation and protector and you can witness this by knowing each and every one of them. Fear did not exist in his vocabulary because his trust was in the Lord. He loved being surrounded by his friends, family, community, and church. If he wasn’t telling you a great story, he was making you laugh while you were telling yours. Bill loved taking care of his yard and there were very few days that went by that you did not see him out in his yard, making sure the grass was cut just so. It was an art and he perfected it! Bill will be deeply missed by his loving wife, Vernell, of 69 years and his 5 children and their spouses; Debbie and Bob Brock of Terrell, Keith and Denise White of Quinlan, Kirt and Marta White of Bedford, Karl and Susan White of Terrell, and Denise and Andy Griffith of Grand Saline. Bill had 14 beautiful grandchildren, 23 great grandchildren, and 2 great-great grandchildren. Bill is preceded in death by his parents, L.D. and Maggie; sisters, Rachel Holland and Barbara Griffin; and granddaughter, Jacoby White. Bill was a member of the First Baptist Church in Terrell, Texas. He loved being involved with his church and served as a Head Deacon of Oak Grove Baptist for several years before moving his letter to First Baptist. Besides being with his family, church is where he felt home. Bill loved the Lord and praised him with each hymnal he sang. In lieu of flowers the family has asked for donations be sent to: Disabled American Veterans at h`ps:// www.dav.org/. Pallbearers are grandsons: Doug Warren, Josh White, Randy White, Michael Carrico, Kase White, Rusty White, Klay White, and Tyler Brock

Funeral service will be 10:30 a.m., Thursday, January 14, 2021, at First Baptist Church of Terrell with interment to follow at Elmo Cemetery with military honors. Family will receive friends Wednesday, January 13, 2021, from 6:00 p.m. to 8:00... View Obituary & Service Information

The family of Bill White created this Life Tributes page to make it easy to share your memories.

Send flowers to the White family.