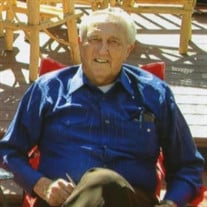 Billy D. Jacobs, of Terrell, passed away peacefully on May 12, 2018 surrounded by family. He was born April 19, 1932 in Terrell to Tom and Minnie Jacobs, both of whom preceded him in death along with his beloved wife, Eunice Ann Mosely Jacobs, brothers: Marvin, Audrey, Leo, Louis and Lloyd Jacobs; and sister, Della Lee McClure. Billy was a hard working young man and enlisted in the US Army where he proudly and honorably served his country. He met Eunice Ann Mosely and on October 5, 1951, they married and spent many happy years together growing in their love and their faith simultaneously. Billy’s devotion to Eunice (whom he always called “Pet”) was known by all who met them and they were inseparable until her passing on Feb. 17, 2008. In 1963, he opened and operated Huffman and Jacobs Construction which, due to his attention to detail and excellent skills for design and building, enabled him to grow his business as Terrell began to grow. Billy was a man of action and his wise counsel was welcomed by both customers and colleagues. His ability to see how to economically and quickly complete projects enabled his company to be the best it could be. Along with his strong work ethic, Billy had a limitless faith in his Lord Jesus Christ. Billy’s spiritual walk was evident every day and he made sure to be an example of Jesus by being a loving, caring, quiet and humble man who selflessly served others before himself. He was a longstanding member of Ables Spring Church of Christ where he and Pet served faithfully and actively. A man whose word was truly his bond, Billy will be missed greatly by all who had the privilege of knowing him. Billy is survived by his daughter, Donna Butler and husband, Jimmy of Terrell; grandchildren: Christopher Busby and Jeffrey Busby, both of Terrell; several great grandchildren; sister, Murline Griggs of Canton as well as a host of nieces, nephews and many friends. Funeral service will be 2 pm, Thursday, May 17, 2018 at Max Slayton Funeral Chapel with interment to follow at Rose Hill Cemetery. Family will receive friends 6 pm to 8 pm Wednesday, May 16, at Max Slayton Funerals and Cremations. In lieu of flowers, the family requests memorials in remembrance of Billy be made to the American Cancer Society at www.cancer.org.

Billy D. Jacobs, of Terrell, passed away peacefully on May 12, 2018 surrounded by family. He was born April 19, 1932 in Terrell to Tom and Minnie Jacobs, both of whom preceded him in death along with his beloved wife, Eunice Ann Mosely Jacobs,... View Obituary & Service Information

The family of Billy D. Jacobs created this Life Tributes page to make it easy to share your memories.

Billy D. Jacobs, of Terrell, passed away peacefully on May 12,...

Send flowers to the Jacobs family.