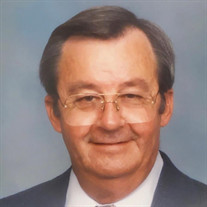 Billy Mack Lee, a long time resident of Terrell, passed away on Dec. 17, 2021. Billy was born March 1, 1935 in Rusk, Texas to W.O. and Maxine (Haney) Lee, both of whom preceded in death along with his sister, Martha Carol Wheeler. Billy joined the Air Force just out of high school and was stationed in Alaska. After his term, Billy returned to Terrell and married the love of his life, Rachel Hussong, on April 4, 1958 at First United Methodist Church. Billy owned and operated a Gulf Oil distributorship for over 40 years in Terrell. For all of Billy’s life, he continued to work-not only to support his family, but also because he had a dedicated work ethic that his generation always subscribed, and adhered, to. Throughout his life of working, Billy’s first priority was always his family. They were avid members of the Terrell Boat Club and he always made sure that the weekends were filled with boating, water skiing and gathering together with friends and family. In his earlier years, Billy was active in the community as a member of the Terrell Jaycee. He could also be found coaching baseball many years for his son and then his grandson at the Terrell Rec fields. A man with a heart for others and a love for conversation with everyone, Billy will be missed dearly and loved forever. He is survived by his wife, Rachel Lee, of Terrell; children: Billy Todd Lee and wife, Melissa, of Terrell, Carrie Kunkel and husband, Steve, of Forney, April Coltharp and husband, Brian, of Ft. Worth; grandchildren: Chad Miller and wife, Amber, Kelsie Kunkel, and Chayce Coltharp; great grandchildren: Dylan and Bayleigh Miller; brother, Bobby Lee and wife, Sandee; brother-in-law, Butch Wheeler as well as several other extended family members and friends. Funeral service will be at 12:00pm, Thursday, Dec. 23, 2021, at Max Slayton Funeral Chapel with interment at Oakland Memorial Park. The family will receive friends beginning at 11:00am to service time. In lieu of flowers, the family strongly suggests that memorials be made to the American Heart Association at www.heart.org or to American Cancer Association at www.cancer.org.

Billy Mack Lee, a long time resident of Terrell, passed away on Dec. 17, 2021. Billy was born March 1, 1935 in Rusk, Texas to W.O. and Maxine (Haney) Lee, both of whom preceded in death along with his sister, Martha Carol Wheeler. Billy joined... View Obituary & Service Information

The family of Billy Mack Lee created this Life Tributes page to make it easy to share your memories.

Send flowers to the Lee family.