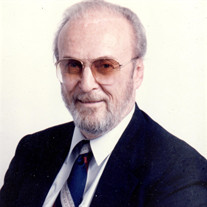 Dr. Bobby Dragoo Beall of Terrell passed away peacefully on March 9, 2019. He was born October 5, 1931, in San Angelo, Texas, to Dr. C.B. and Wanda (Dragoo) Beall, both of whom preceded him in death along with his sister, Billye Beall Wendland and her husband, Weldon Wendland; aunts, Wilda Dragoo and Juanita Beall Dabney, and her husband, P.G.; niece, Wren Tremblay; and first wife, Gloria Woods Beall. Dr. Beall grew up in San Angelo and graduated from San Angelo Central High School where he excelled academically and athletically. He played football, basketball and baseball and his talent on the baseball field earned him a scholarship to Duke University, which he declined in order to pursue his medical degree. After three years at Rice University where he made the Dean’s List, he was accepted at the University of Texas Medical Branch in Galveston in 1953. He received his M.D. degree in 1957. At UT-Galveston, Dr. Beall served an internship from 1957-1958 and his residency in Neurology and Psychiatry from 1958-1961. On April 11, 1959, Dr. Beall married Linda McMillan in Silsbee, Texas. In 1961, Dr. Beall began his private practice in psychiatry in Abilene, Texas, where he was instrumental in starting a suicide hotline. In 1972, the family moved to Terrell for him to accept a position as staff psychiatrist with Terrell State Hospital. During his career, Dr. Beall became known as a consummate professional dedicated to improving healthcare for his patients, their families and the organizations that he worked with. Dr. Beall was always more than willing to share any knowledge with others to facilitate excellent care for every patient. His insightful care and compassionate demeanor made him an asset to each medical group that he joined. Oftentimes, Dr. Beall would be at work “after hours” completing required documentation in order to provide all the help and support he could to each person in his care. He was a member of Nu Sigma Nu, Texas Medical Association, Titus Harris Society, and Rotary Club; he also served as a consultant to the Kaufman County Medical Society. After retiring from Terrell State Hospital in 1996, Dr. Beall served in many places on a locum-tenens basis including Arizona, Texas, and Ohio, with a special emphasis on counseling inmates in several correctional institutions. Dr. Beall was fascinated with all things having to do with aviation and spent many hours building and flying radio-controlled airplanes. He believed that a person never stopped learning and so all subjects of world history intrigued him, especially the U.S. Civil War. Dr. Beall acknowledged that heritage plays an enormous role in everyone’s life and celebrated his Scottish ancestry by attending the Gathering of the Clans in Salado, Texas. His career as a psychiatrist spanned many decades and many locations where his impact on both medical facilities and patients can be felt to present day. But his commitment to being the best man he could be every day is what defined Dr. Beall as a man of honor, integrity and utmost compassion. Dr. Beall is survived by his wife of almost 60 years, Linda Beall, of Terrell; children: Allen McMillan Beall and wife, Wynonne, of Shreveport; Brenda Beall of Bedford; Sharon Johndrow and husband, Patrick, of Tulsa; and Robert Daniel Beall of Terrell; grandchildren: Alyssa Black and husband, Mike; Hanna Tidwell and husband, Barnett; Drew Beall and wife, Brooke; and Kristen Beall; great-grandchildren: Adelyn Black, Warren Tidwell, Jennings Tidwell, Evie Beall, Carson and Jaxon Smith; and nephews: Wendt Wendland and Wes Wendland, as well as other extended family, colleagues and a host of friends. Funeral service for Dr. Bobby Beall will be at 11:00 a.m. on Wednesday, March 13, 2019, at Max Slayton Funeral Chapel with interment to follow at College Mound Cemetery. The family will receive friends from 6:00 to 8:00 p.m. on Tuesday, March 12, 2019, at the funeral home. In lieu of flowers, the family asks that memorials be made to the Wilda Dragoo Music Study Scholarship Fund, c/o NSF Music, PO Box 712, Eastland, TX, 76448.

Dr. Bobby Dragoo Beall of Terrell passed away peacefully on March 9, 2019. He was born October 5, 1931, in San Angelo, Texas, to Dr. C.B. and Wanda (Dragoo) Beall, both of whom preceded him in death along with his sister, Billye Beall Wendland... View Obituary & Service Information

The family of Dr Bobby Dragoo Beall created this Life Tributes page to make it easy to share your memories.

Send flowers to the Beall family.