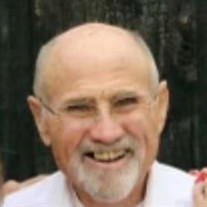 Bobby Rutherford, of Forney, passed away on Feb. 17, 2021 in Dallas. Bob was born September 25, 1940 in Terrell to Walter and Emma (Hill) Rutherford, both of whom met him in Heaven along with his sister, Jewel Luther and three brothers: Ferry, Jimmy and Carl Rutherford. Bob grew up in Terrell and graduated from Terrell High School in 1960 where he played on the 1957 State Championship football team as well as the 1958 State Semi-finalist team. Bob’s athletic talent was recognized by being named to the 2nd Team Texas Class 2A All-State Football Team in 1958. He worked as a butcher for Safeway Grocery for over 22 years where his smiling face was a welcome sight to the many customers that he helped. Bob had a strong entrepreneurial spirit and he owned and operated many businesses including B & S Auto Sales and Champion Gas Station on Broadway Blvd. in Garland where again, his friendly personality and honesty earned him a tremendously positive reputation amongst the many customers that he helped. Bob also owned many rental properties where his integrity and kindness to his tenants made him more like family than a landlord. Bob and his son, Steven, also were partners for over 20 years in their own business, Rutherford Roofing, and his dedication to making sure that every project was done right and economically set the bar high for others in the roofing industry. While Bob seemed to fill his time with working outside the home, he was, first and foremost, devoted to the Lord and serving Him in any capacity as well as a devoted husband and father. His faith set a strong foundation for his wonderful wife, Shirley, whom he married on Aug. 4, 1962, their two children and their grandchildren. He was a 25 year member of Gideon’s International and utilized his daily interactions with others during his work projects to share the Gospel and love of Jesus Christ to all who met him. Bob’s daily commitment to sharing the word of God to others made him instrumental in the distribution of thousands of Bibles to 5th graders in Kaufman County over a 25 year period and to many residents in Honduras so that they, too, could come to know the Lord. A man who understood that words mean nothing without action, Bob made sure that each day he demonstrated the grace and unconditional love of his Savior to others so that they could see that following Jesus was the very best decision anyone could make in life! He and Shirley were longtime members of Faith Fellowship Church of the Nazarene in Terrell where they were very active and enjoyed countless friendships. Bob had a passion for singing Gospel music and enjoyed sharing that passion and ministering through music. Bob’s generous heart and genuine care for others will be a treasured heritage that his family will be proud to carry on into future generations and he will be missed by all who knew him. Bob enjoyed spending time with his family. Whether it be Sunday dinners, Friday or Saturday football games, or any other time one of his kids and later his grandkids and great grandkids had a game or other event. His love and pride for his family ran deep and he was always there for them. He is survived by his loving wife of over 58 years, Shirley Rutherford of Forney; daughter, Lisa York and husband, Mel of Forney; son, Steven Rutherford and wife, Karen, of Terrell; grandchildren: Heather Nicole Hipo and husband, Jeremy, Joshua Lewis York and wife, Jill, Preston Wayne Rutherford and wife, Brenda, Clayton Carroll Rutherford and Emily Ann Crowder; great grandchildren: Jaxon Hipo, Jesse Hipo, Jon York and Malia York; brothers: Don Rutherford and wife, Maude, Joe Rutherford and wife, Tommie as well as numerous nephews, nieces, extended family and a host of friends. Funeral service will be at 12:00pm, Tuesday, Feb. 23, 2021 at Max Slayton Funeral Chapel in Terrell with interment to follow at Crandall Cemetery. His family will receive friends beginning at 11:00am to service time. In lieu of flowers, the family asks that memorials in honor of Bob’s passion for sharing the Gospel be made to the Gideon’s international at https://www.gideons.org/donate so that all can come to know the love and grace of Jesus Christ.

Bobby Rutherford, of Forney, passed away on Feb. 17, 2021 in Dallas. Bob was born September 25, 1940 in Terrell to Walter and Emma (Hill) Rutherford, both of whom met him in Heaven along with his sister, Jewel Luther and three brothers: Ferry,... View Obituary & Service Information

The family of Bobby Carroll Rutherford created this Life Tributes page to make it easy to share your memories.

Send flowers to the Rutherford family.