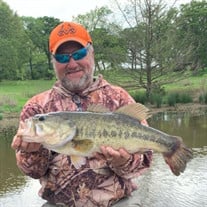 Charles Bruce Benedict, 58, of Forney, Texas; son of Charles Millard Benedict and Florence Lee Fewell Benedict, went to be with the Lord on Oct. 11, 2021. Bruce was born on Dec. 16, 1962 in Dallas, Texas. He was raised in the Dallas area until 1977 when his parents decided it was time to move to Forney, Texas, his hometown for the last 44 years. He was a member of the First Baptist Church of Forney. Bruce was preceded in death by his paternal grandparents, Thomas Fieldon Benedict, Sr. and Hazel Janice Apple Benedict; his maternal grandparents, William Royce Fewell and Vera Lee Fry Fewell. He was also proceeded in death by his uncles, Fieldon Clyde Benedict (Ethel Mae Beal Benedict), Jack Morris Benedict and Thomas Fieldon Benedict, Jr.; aunts, Shirley Maureen Benedict Clark (Jackie Ray Clark), and Peggy Olivia Benedict Cook (Woodrow Cook Jr.) His father-in-law and mother-in-law Charles Everett Seabolt and Val Jean Kent Seabolt. He is survived by his parents, his wife of 36 years, Charlsie Ann Seabolt Benedict; his children, Britney Ann Benedict Tarno (Ben Anthony Tarno); Charles Colton Benedict (Meagan Joy Toon Benedict) Makayla Ann Benedict and Dakota Ann Benedict. Grandchildren Hallie Jo Tarno and Charlotte LeeAnn Benedict. He is also survived by his sister, Gina Christine Benedict Harvey (James “Jaime” Glen Harvey) and nieces Ryley Christine Harvey and Rylan Christian Harvey Rashall (Derek Kevin Rashall); sister-in-law, Valarie Kay Seabolt Knabe and nephew Damon Dominic Knabe (Lauren Ulcak Knabe). Survived by his great niece and nephew, Carter Collins Harvey and Jaxon Thor Harvey Javier. He is also survived by his aunt, Norma Jean Benedict Petty (Bob Louis Petty (deceased)) and his uncle, William Roy Fewell (Sheila Dore Fewell). He is also survived by a host of very close cousins, relatives, extended family members and friends far and near. Bruce graduated from Forney High School in 1981 and East Texas State University in 1984. He was an accomplished athlete throughout his life playing baseball and football, soccer, swimming and competing in track. He was a member of 1980 Forney High School Jackrabbits semi-finalist football team and captain of the football team. He was first team All-District offensive guard and defensive linebacker. Bruce was also Best Actor in the One-Act Play, “The Prize Fighter,” his senior year. He earned the FFA Lonestar Degree and Greenhand Degree and also won grand champion steer and reserve grand champion steer. He was a member of the Key Club and student council president. He played baseball at Ranger Jr. College. Bruce also made a living in the sport of bass fishing as a member of the Bassmaster’s Top100 and owner of JawTec Tackle Company. He passed on his passion for softball by coaching various teams through the years including The Blues and The Sox. He loved his community and was proud to be a Forney Jackrabbit. He was elected to the Forney ISD School Board and served two terms. Bruce was a loving son, brother, nephew, grandson, husband, father and grandfather. He was the ultimate entrepreneur choosing at an early age to be his own boss and owned several businesses through the years to provide for his family. He will be missed dearly by many family and friends. Special thanks to so many who have comforted Bruce and his family through calls, texts, visits, food, flowers and prayers. We thank you all for your constant friendship, love and support.

Charles Bruce Benedict, 58, of Forney, Texas; son of Charles Millard Benedict and Florence Lee Fewell Benedict, went to be with the Lord on Oct. 11, 2021. Bruce was born on Dec. 16, 1962 in Dallas, Texas. He was raised in the Dallas area until... View Obituary & Service Information

The family of Bruce Benedict created this Life Tributes page to make it easy to share your memories.

Send flowers to the Benedict family.