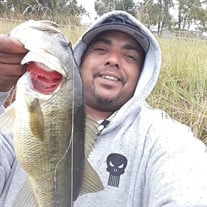 Carl Edward Hambrick-Lawson passed away November 17, 2018. Carl was born December 31, 1979 in Dallas, Tx to Carl Edward Hambrick and Regina Lawson-Pope. Carl was reunited in Heaven with his daughter, Ashley May Hambrick, grandparents: Preston and Patsy Heidelberg, and Lonnie Self, uncles: John Rutherford and Donald Hambrick and aunt, Debbie Gill. Carl had an outgoing personality that immediately drew others to him. He always had a smile and he always brought a smile to the faces of all who knew him. He had a love for life and treated every day as a gift from God. He believed whole heartedly that life was meant to be lived to the fullest and he would often tell others to never waste an opportunity to help lift others up, encourage, love and make every experience into a lifelong memory. His spontaneity was well known and he was often the leader of trips and activities (including shopping for fishing supplies!) that were planned with his fun and impulsive personality as the guiding force. To say that Carl enjoyed fishing is an understatement-he could, and would, always find a good fishin’ place to make sure that every fish was casted for and caught. Everyone who knew him knew Carl’s favorite places to fish were ‘wherever he could hop the fence’! He loved to cook for his family and friends and Carl had an innate talent for combining any ingredient into a great meal. His specialty was bar-b-que but he could take any dish to the next level of taste and enjoyment. His devotion to his children was obvious to all who met him and he never let a day go by that he didn’t let them know how much he loved them. A great man with a generous heart, Carl will be missed by all who had the privilege of knowing him. Carl leaves a loving legacy to carry on to his wife, Jessica Struggs-Lawson of Kaufman; children: Malliza Masters and Carl Levante Hambrick of Kaufman; mother, Regina Pope of Wichita,KS; father, Carl Hambrick, of Terrell; sister, Kelly Dansby and husband, James, of Canton; nieces: Shelby Cunningham of Zapata, TX and Brynlei Cunningham of Canton; mother-in-law, Karen Anderson and Alan Taylor, of Kaufman, and brothers: Ryan Conder and Tory Hambrick; grandmother, Sadie Blanton as well as many other extended family and a host of friends. Funeral service will be at 1:00pm, Wednesday, November 21, 2018 at Max Slayton Funeral Chapel. The family will receive friends 6:00pm to 8:00pm, Tuesday, November 20, at the funeral home.

The family of Carl Hambrick Lawson created this Life Tributes page to make it easy to share your memories.