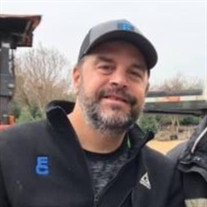 Chad's funeral service will be livestreamed on the First Baptist Church of Terrell's Facebook page at this link: https://www.facebook.com/FirstBCTerrell Chad Everett Provo, of Terrell, passed away into the presence of his Savior and Lord on the morning of December 22, 2020. Chad was born on January 13, 1972 in Fergus Falls, MN to Gerald and Shirley (Larson) Provo, both of whom also met him in Heaven along with his sister-in-law, Stacy Straus Reed. Chad grew up in Buffalo, MN and graduated from Buffalo High School where he was an accomplished and talented baseball player with the high school team and later with the college he attended. His skills allowed Chad to try out for two major league teams but, while his talent was recognized by all who saw him play, God had other plans for his life. Chad moved to Texas in 1995 and in 1997, through mutual friends, he met Cory Straus. On April 20, 2002, they were married in Dallas and they began a life filled with laughter, faith and lots of love. He worked as an Asst. Project Manager and Superintendent with Fivecoat Construction where his insight and dedication to excellence were valued assets to the company. He enjoyed doing anything that was golf-related, including playing, and his reputation as an outstanding cook (especially his signature hamburgers and meatballs) was widely known among family and friends and friends of friends! He was a devoted husband and dad and he loved to attend the games of his son, Brooks, and daughter, Evie, so he could support them in all their activities including coaching a few of their teams. His coaching was instrumental in helping other students see their own potential in that Chad had a special way of encouraging each player to give it their very best on the field. While Cory and the kids were his priority, the rest of his family was very close to Chad’s heart and he took every opportunity he could to go “home” to Minnesota to visit them all. His dedication to family was a hallmark of Chad’s character along with his devotion to being a true follower of Jesus. Chad embodied the love of Christ to everyone he met whether it be on the game field, at church, on the job site or in spiritual conversations with those who met him. His smile was contagious and his exuberance talking about the things and people he loved spread joy to everyone he met! He and Cory were members of Community Life church in Forney and as Chad grew in his spiritual walk to always be closer to God, he also became involved in Tres Dias, a Christian based group offering three day retreats which continued to equip and empower Chad, as well as others, to not only share the Gospel, but to be the example that others could readily see every day. In that he always had a helpful and generous heart for others, Chad’s growth in the Holy Spirit allowed him to be able to be the visible representation of true servanthood to every person in need. Chad never took for granted the unconditional love of the Father and he felt grateful to be used as a vessel to pour into others with his time, his talent, and his faithful service. A man of great devotion to his Lord, his family and friends, Chad’s legacy of unwavering love (and the best and biggest hugs!) will be carried on in their lives as well as generations to come. Chad is survived by his beloved wife, Cory Provo; precious children, Brooks Provo and Everett (Evie) Provo; brother, Todd Provo and wife, Kim, of Wylie, TX; sisters: Michele Kimmes and husband, Bob of Farmington, MN and Yvonne Rosseau and husband, John, of Green Valley, AZ; nieces: Heather Kimmes, Trista Kimmes; nephews: Dustin Kimmes. Dustin Johnson and Christopher Fouquette; great-nephew, Shain Kimmes; great-niece, Adriannah; parents-in-law, Glenn and Susie Straus; brother-in-law, Robert Reed as well as several other extended family and a host of friends, near and far, who loved him dearly. Funeral service will be at 11:00 a.m., Tuesday, December 29, 2020, at First Baptist Church in Terrell with an interment to follow at Oakland Memorial Park. Chad's family will receive friends from 4:00 p.m. to 8:00 p.m. Monday, December 28, 2020, at Max Slayton Funeral Chapel. There has been a benevolent fund set up for Cory, Brooks and Evie at American National Bank under the name of Provo family or donations can be made to https://www.mealtrain.com/trains/30eokw?fbclid=IwAR2XjfRWJZJy276SVncz-LhGRHKI-mDHoBr8T8Ff9GhmnL0aej_aJQOzEwY.

Chad's funeral service will be livestreamed on the First Baptist Church of Terrell's Facebook page at this link: https://www.facebook.com/FirstBCTerrell Chad Everett Provo, of Terrell, passed away into the presence of his Savior and Lord on... View Obituary & Service Information

The family of Chad Provo created this Life Tributes page to make it easy to share your memories.

Chad&#39;s funeral service will be livestreamed on the First Baptist...

Send flowers to the Provo family.