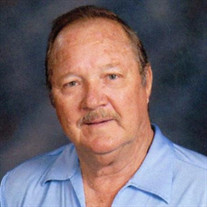 Charles “Gene” Lawhorn, of Terrell, passed away Feb. 7, 2017 surrounded by loving family. Gene was born June 24, 1941 in Terrell to James Holton and Livicia (Lawson) Lawhorn. He was welcomed into Heaven by his parents, grandparents, his grandson, Kevin Daniels, brother, Michael Lawhorn and nephew, Chad Lawhorn. Gene was lifetime resident of Terrell and never had a desire to move anywhere else as he considered Terrell perfect in every way. While enlisted in the Army, Gene served with the Military Police, was a Medic Corpsman and received his Sharpshooter Ribbon. After being honorably discharged, he came back to Terrell where he worked at many different places all with one thing in common: serving others. He worked at Terrell Laundry where he delivered to customers brightening their day with his special brand of humor. He also worked at Musser’s Chevrolet where, again, he was able to serve others with service or delivery of their vehicles. Gene loved to learn new things and he became certified as an accountant during his life and he loved his family reunions. Gene could always be counted on to secure the place for the reunion as well as making sure all the details were seen to for the entire family to just relax and visit. He also enjoyed dancing and his many awards over the years were trophies that he was very proud of. His love for others and the Lord kept him active during his lifetime membership at First Baptist Church where he was the first to greet others whether they be first time visitors or longtime members. Gene also was a tireless volunteer at the Share Center where he looked forward to helping others each week and he even delivered items to folks in the community who were not able to get to the Center. A wonderful man with a vibrant wit and a generous heart, Gene will be missed by all who knew him. He leaves to carry on his legacy his children: Genevieve Brammer and husband, Patrick, of Bristol, Tx and Timothy Lawhorn and wife, Melinda of Campbell, Tx; grandchildren: Felicia Brown, Laura Johnson, Annastasia Lawhorn and Melissa Byrd; great grandchildren: Emma Brown, Taniya Johnson, Kassidy and Kelvin Hale; siblings: James Lawhorn and wife, Caroline of Rockwall, Wayne Lawhorn and wife, Janice, Donna Rigney and Vickie Adams; uncle, Grady Lawson; aunt, Ollie Fay Lawson as well as several nieces, nephews, extended family, church family and a host of friends. Funeral service will be at 11:00am, Saturday, Feb. 11, 2017 at First Baptist Church of Terrell with the family receiving friends beginning at 10:00am to service time. Interment will follow service at Oakland Memorial Park. For those wishing, memorials may be made to the Share Center, 103 W. Jones St, Terrell, 75160 or to First Baptist Church, 403 N. Catherine, Terrell, 75160.

Charles &#8220;Gene&#8221; Lawhorn, of Terrell, passed away Feb. 7, 2017 surrounded by loving family. Gene was born June 24, 1941 in Terrell to James Holton and Livicia (Lawson) Lawhorn. He was welcomed into Heaven by his parents, grandparents,... View Obituary & Service Information

The family of Charles "Gene" Lawhorn created this Life Tributes page to make it easy to share your memories.

Send flowers to the Lawhorn family.