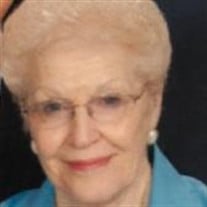 On July 28, Elizabeth Charlyne “Nana” Sledge peacefully went to be with the Lord at the age of 85. Born in Wills Point, TX on May 28, 1934, to Joe Maxie “JK” and Mattie Lou Rankin, Charlyne grew up in Wills Point. She married Roe Wayne Sledge, son of Sterling Emmett and Julia Mae Sledge of Wills Point, on February 1, 1953. They were married for almost 65 years. Charlyne is survived by: son, Maxie Wayne Sledge; daughter, Julia Lu Rosol and husband Joe; six grandchildren: Mandy Howard, Ashley Thieman and husband Ben, Chelsea Sledge, Haley Sledge, Meredith Vance and husband Steve, Michael Rosol; eight great-grandchildren: (Mandy: Mason Wayne, Jackson Joseph, Maddison Julia); (Ashley: Colton Neal), (Meredith: Taylor and Kaitlyn); (Michael: Bode and Mees); brother, Bobby Rankin and numerous cousins, nieces, and nephews. She was preceded in death by her husband, parents, and sister (Lue Jean Beck of Wills Point). Charlyne was in the band, playing the trombone, all through high school and was involved in numerous extra-curricular groups. She was also an accomplished pianist. After graduating, Charlyne attended Texas Woman’s University in Denton and went to work for Collins Radio in Richardson, now a part of Rockwell Collins. In 1963, she and Wayne moved to Plano, TX where they lived for 22 years. Soon after moving to Plano, she decided to change her career to educational administration and became the school secretary first at Sigler Elementary School and later as the administrative assistant to the superintendant of schools for many years. She retired from the Plano ISD after 25 years of helping the district navigate through a very explosive period of population growth in Plano. Charlyne and Wayne moved to Terrell in their later years, toward their childhood home, in order to return to a small town environment and to be closer to their families living in Wills Point. Charlyne was an encourager, had a servant’s heart, and was very devoted to her family, nothing was more important. She never had an unkind word to say about anyone and was loved by many friends, old and new. She personified the characteristics of what is described in Proverbs 31 as a virtuous woman. She exhibited beauty, grace, tenderness, and love in all she did. A memorial service will be held at the First Baptist Church in Terrell, TX on Saturday, August 10, 2019, at 11:00 with a luncheon to follow.

The family of Charlyne Sledge created this Life Tributes page to make it easy to share your memories.

Send flowers to the Sledge family.