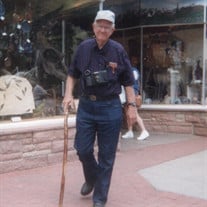 Dr. Chester Davis January 28, 1920 - February 12, 2019 Dr. Chester Davis, son of Charles and Sylvia Davis, was born on January 28, 1920 on Pennsylvania Avenue in Washington, DC. He passed away peacefully on February 12, 2019 in Forney, Texas. He is survived by his wife of 37 years, Iva Davis, daughter Rhonda O’Reilly, and step children: Regina Logan and husband, Randy, Cheryl Tillery and husband, Marc, and Ronnie Howie. He also has numerous grandchildren and great grandchildren. Dr. Davis was preceded in death by wife Aimee Davis, son Rodney Davis, son-in-law, Steve O’Reilly, and great grandchild Jesse O’Reilly. Dr. Chester Davis, a 1943 graduate of the University of Texas Dental School in Houston, was a practicing dentist for his entire professional life. His work history includes private practice and employment at Terrell State Hospital in Terrell until retirement. He was a veteran of World War II, serving as a Captain in the U.S. Army from 1944 through 1946. Dr. Davis had a passion for hunting, fishing and being outdoors and frequently vacationed in Colorado. He also had a love for building model boats and planes. He also learned taxidermy and enjoyed bowling. Chester was affectionately called “Doc” by those who knew him well. Doc was admired for his dedication to his family and giving spirit. His family and friends will greatly miss him--but he will always remain in our hearts and fondest memories. The family would like to thank you for your support and prayers during this difficult time. Your words of comfort & expressions of kindness are greatly appreciated. Funeral service for Dr. Chester L. Davis will be 10 am Saturday February 16, 2019 at Max Slayton Funerals and Cremations with interment to follow at Oakland Memorial Park with military honors. Family will receive friends Friday, 5:00pm to 7:00pm, February 15, 2019 at Max Slayton Funerals and Cremations.

The family of Dr. Chester L. Davis created this Life Tributes page to make it easy to share your memories.

Send flowers to the Davis family.