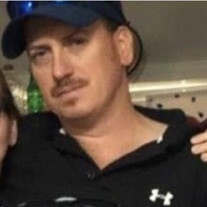 Christopher John Lee Howard passed away September 11, 2020, in Dallas, Texas. Chris was born September 7, 1983 to Todd A. Shaddox and Lisa Howard in Terrell, Texas. His father, Todd, preceded him in death along with his maternal grandparents Orvan and Alice Howard. Chris graduated from Seagoville High school in the class of 2002. He went on to become an extremely skilled locksmith whose talent for figuring out even the most complicated mechanisms earned him a great reputation. Christopher loved working with his hands and was known as a very hard worker. He was also talented musician playing the drums and guitar as well as an amazing ability to sing. He enjoyed all kinds of music and really enjoyed listening while he spent time with his family and friends. Chris was an amazing and devoted father who would do anything for his children was always there to lend a listening ear, pat on the shoulder, or a quick laugh. Christopher made everyone smile and laugh with his witty humor and will be missed by all who were in his life. Chris leaves to cherish his memory his loving wife, Jamie Howard; children: Maddison Howard, Christopher Andrew Howard, Jessica Perales and Josie Perales; mother, Lisa Floyd; step-dad, Jeff Shipman; siblings: Natalie White, Amanda Dagenais, Jeffrey Shipman, Nicholas Shipman; longtime friend, mentor and father-like figure, Bernie Murphy and wife Kelly, Bernie’s daughter, Brittany Strom and her husband, Tim; faithful friend and coworker, Joey Lewis and the entire KeyGenix family; former wife, with whom he remained close, Cassandra Scherzer and husband, DJ as well as several nieces, nephews, extended family and many close friends who will miss Christopher deeply. Funeral service will be at 11:30am, Saturday, Sept. 19, 2020 at Max Slayton Funeral Chapel with the family receiving friends beginning at 10:00am to service time.

Christopher John Lee Howard passed away September 11, 2020, in Dallas, Texas. Chris was born September 7, 1983 to Todd A. Shaddox and Lisa Howard in Terrell, Texas. His father, Todd, preceded him in death along with his maternal grandparents... View Obituary & Service Information

The family of Christopher John Lee Howard created this Life Tributes page to make it easy to share your memories.

Send flowers to the Howard family.