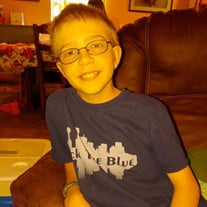 Christopher Hulsey, beloved son of Michael and Julianna Hulsey, passed away on Saturday, May 16, 2020. Chris was born June 8, 2005 in Greenville, Texas and he was met at the gates of Heaven by his grandfather, John Michael Hulsey, Sr., great grandmother, Ernestine Randolph, and great aunt, Sue Dixon. Christopher was a lifelong member of the Boy Scouts, Troop #390 and he loved everything about Scouting and being outdoors. He went on many hiking, camping, and fishing trips with his scout group and family. Taking the Scout rule of “Always leave the campground cleaner than you found it” very seriously, Chris said he was ‘bound by the scout principal’ and used the many skills he learned there and in 4-H daily. When Christopher was not outside, he liked to tinker with robotics and computer coding. He loved his family the most and his devotion to his family was the first thing others noticed about him in addition to his smile. Christopher would often remind people to ‘stay strong’ when things were tough, especially in his last few days. His legacy of strength and love will be missed and treasured by his parents, sisters and brothers, extended family, Scout family and so many others whose life he touched. Christopher leaves behind to cherish his wonderful memory his parents, Julianna and Michael ‘Radar’ Hulsey; sisters, Lillianna Mae Hulsey and Hanna Louise Hulsey; brothers, John Michael Hulsey, III and Benjamin Andrew Hulsey; grandparents: Sherry Hulsey, Joe Hulsey, Cherie Randolph, Dennis Ruffner, and Beatriz Ruffner; great grandfather, Madison W. Randolph, Jr.; uncles: David Hulsey, Charles Randolph, Zachary Ruffner; aunt, Cindy Randolph; cousins: Madison Randolph IV, Rachel Randolph, LilyAnne Randolph, Ellanor Randolph as well as many friends from his scout group, school and extended family.

Christopher Hulsey, beloved son of Michael and Julianna Hulsey, passed away on Saturday, May 16, 2020. Chris was born June 8, 2005 in Greenville, Texas and he was met at the gates of Heaven by his grandfather, John Michael Hulsey, Sr., great... View Obituary & Service Information

The family of Christopher Hulsey created this Life Tributes page to make it easy to share your memories.

Send flowers to the Hulsey family.