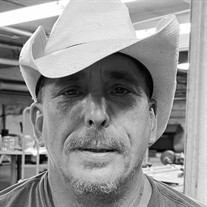 Christopher Truman Wilson Sr., passed away on May 10, 2022. He was born in Englewood, New Jersey, to William Donald Wilson Sr., and Patricia Reynolds on June 13, 1968. Christopher is preceded in death by his father, William Donald Wilson Sr. and nephew, Gavin A. Plyler. Christopher graduated from high school where he attended with his best friend, Christine Thoms. The pair found each other again as Christopher moved to Terrell, Texas in 1995. There, he, and Christine would develop a loving bond and were married on September 1, 1996. They were blessed with two sons who meant the world to Christopher. Christopher was not only an invested father and husband, but he was also an industrious worker. A resolute employee, Christopher worked at Terrell State Hospital as a boiler operator for 25 years. Christopher had a passion for the outdoor lifestyle. He would travel, camp, and one of his favorite pastimes, fish, especially trout in Arkansas. Left to cherish Christopher’s memory is his loving wife of 25 years, Christine Thoms, of Terrell; sons: Christopher Wilson Jr. and Cecil Alexander Wilson, all of Terrell; grandchildren: Noah Alexander Lewis, Christopher Wilson III, and Baylee Blake Wilson, all of Terrell; mother and step-father, Clifford and Patricia Mueller; brother, William Wilson, Jr. & wife Joselle, of Lawrenceville, GA; sisters: Robyn Wilson of Gastonia, NC, Tricia Wilson, of Lawrenceville, GA, and Jessica & husband Brian DeSantis, of Brick, NJ. A Celebration of Life will be held by the family on Saturday, May 21, 2022, at 3:00 p.m. at the All Faith Chapel on Terrell State Hospital property with a reception to follow.

The family of Christopher Truman Wilson Sr. created this Life Tributes page to make it easy to share your memories.