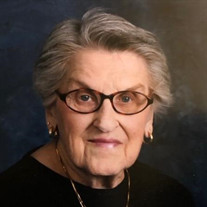 Clara Eoline Hanna Burnett passed away peacefully on the morning of January 3, 2020. She was born at home on July 3, 1923 in the Crossroad Community near Cooper, Texas to Harold Jennings and Eula Clementine Stanley Hanna. Clara has been an active and longtime member of College Mound United Methodist Church where she also served in the United Methodist Women. She worked at Colonial Hospital in Terrell for 22 years until her retirement in 1990 having been a delightful and caring person to so many patients in her care. Clara was married to Raymond Burnett in 1945 and lived in Kemp until moving to Terrell in 1968. She had an appreciation for the simple things in life including Dr. Pepper and peanut butter and crackers. She also loved cats and dogs, especially her beloved dogs, Peanut and Tater Tot. She had a passion for growing four o’clock flowers and many cuttings and seedlings were shared with her family and friends. Clara was always a caregiver to everyone and her kind heart was known by many and she was happiest when took care of others. A selfless model of a gracious and generous lady, Clara will be missed greatly by all who knew her. She was preceded in death by her parents, husband, Raymond Burnett, son, Terry Burnett, son-in-law, Carroll Sluder and her sister, Joyce Brackeen. She is survived by her children: Eddie Burnett and wife, Sharon, of Kemp, Patti Sluder of Terrell and Mary Penn of Carrollton; sister, Verda Carrington of Sulphur Springs; grandchildren: Edward Burnett and wife, Amanda, Ashliegh Naylor and husband, Scott, Stacy Ellis and husband Mike, Casey Sluder and wife, Stephanie, Devin Garner, Tara Burnett, Amanda Parker and husband, Daniel; great grandchildren: Hanna Tidwell and husband, Barnett, Drew Beall and wife, Brooke, Sydney, Meredith and Harper Ellis, Kaylee Sluder, Allara Wilhite, Leah and Lauren Bird, London and Maddox Garner, Hailey Burnett, Henry and Hayes Parker; great-great grandchildren: Warren and Jennings Tidwell, Carson and Jaxon Smith and Evie Beall as well as numerous nieces, nephews, other relatives and a host of friends. Funeral service for Clara will be 11:00 am Wednesday January 8, 2020, at College Mound United Methodist Church with interment to follow at College Mound Cemetery. Family will receive friends Tuesday January 7, 2020, from 6:00 pm to 8:00 pm at Max Slayton Funerals and Cremations.

Clara Eoline Hanna Burnett passed away peacefully on the morning of January 3, 2020. She was born at home on July 3, 1923 in the Crossroad Community near Cooper, Texas to Harold Jennings and Eula Clementine Stanley Hanna. Clara has been an... View Obituary & Service Information

The family of Clara Burnett created this Life Tributes page to make it easy to share your memories.

Clara Eoline Hanna Burnett passed away peacefully on the morning...

Send flowers to the Burnett family.