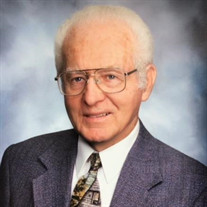 Clayton Stewart Watkins, Jr., beloved father, grandfather, brother, friend and pastor, passed into the presence of his Lord and Savior, whom Clayton served so faithfully, on March 10, 2019 with family at his side. He was born March 28, 1921... View Obituary & Service Information

The family of Clayton Watkins created this Life Tributes page to make it easy to share your memories.

Send flowers to the Watkins family.