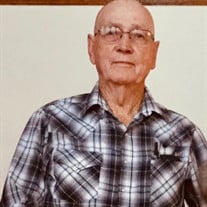 ***PER FAMLIY REQUEST, MASKS ARE REQUIRED DURING VISITAITON AND FUNERAL SERVICE. THANK YOU FOR YOUR UNDERSTANDING*** Clifton Sitzes (Cliff), of Terrell, passed away into the presence of his Savior on October 15, 2020. Cliff was born March 2, 1936 in Glen Allen, Missouri to the late Glen and Stella Seward Sitzes. He was preceded in death by his parents; step mother Eula Sitzes; siblings: Roy Sitzes, Everett Sitzes, Gladys Burris, and stepsister, Thelma Donahue. Cliff came to Terrell in 1954 as a young man and here he met the love of his life, Bessie Faye Hunt, and on Feb. 18, 1955, they married. Cliff worked with Gene’s Plumbing Co. for several years before he started his own company, Cliff’s Plumbing that he operated for over 50 years. Cliff was known for his expertise and incredible knowledge of fixing any plumbing issue but the reputation that he, and his family was the proudest of, was how he could be counted on to help anyone in need. Be it an emergency plumbing issue that he could fix for little or no payment or providing help to a person in need or finding resources to help many in the community get back on their feet, Cliff’s generosity was a well-known fact around Terrell and beyond. In his spare time, Cliff was an avid fisherman and had a marvelous green thumb as evidenced by the beautiful seasonal flowers of his yard and bountiful harvest from his garden (which he willingly shared with so many family and friends!) He and Bessie were longtime and active members of First Assembly of God Church in Terrell where he especially enjoyed fellowship with his Sunday School Class and the rest of his church family. A quiet man of great strength, both physically and spiritually, Cliff will be missed by so many who will be proud to carry on his legacy of generosity and Christ-like love into future generations. Cliff is survived by his beloved wife of over 65 years, Bessie Sitzes; children: Ronald Sitzes and wife, Pam, of Terrell, Linda Sitzes Southam and husband, Mark, of Rockwall; grandchildren: Shelli Sitzes Chandler and husband, Carl, Rodney Sitzes and wife, Erica, John Vishnesky and wife, Jessie, Thomas Southam and wife, Melissa, and Alex Southam and wife, Lauren; great grandchildren: Logan Holmes, Landry Sitzes, Avery Chandler, Amelia Southam, Beckett Southam, Walter Southam, Arthur Southam, and Evelyn Southam; siblings: Verdell Sitzes and wife, Diane, Rosetta (Rosie)Scull, Joyce DeLay and husband, Joe , and step-brother, Sonny Johnson as well as many other nieces, nephews, extended family and a host of friends, all of whom loved him and will miss him dearly. Funeral service will be 11 am Thursday October 22, 2020 at Max Slayton Funerals and Cremations with interment to follow at College Mound Cemetery. Family will receive friends 5 pm to 7 pm Wednesday October 21 at Max Slayton Funeral Chapel.

***PER FAMLIY REQUEST, MASKS ARE REQUIRED DURING VISITAITON AND FUNERAL SERVICE. THANK YOU FOR YOUR UNDERSTANDING*** Clifton Sitzes (Cliff), of Terrell, passed away into the presence of his Savior on October 15, 2020. Cliff was born March... View Obituary & Service Information

The family of Clifton Sitzes created this Life Tributes page to make it easy to share your memories.

***PER FAMLIY REQUEST, MASKS ARE REQUIRED DURING VISITAITON AND...

Send flowers to the Sitzes family.