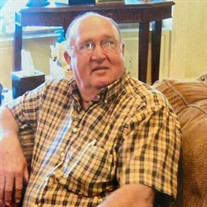 Clyde Scott, of Terrell, passed away on Jan. 12, 2021. Clyde was born July 2, 1945 in Wills Point, TX to Forest Gilford and Catherine (Johnson) Scott, both of whom preceded him in passing along with his sisters: Joyce Cornwell, Fern Carter and Patricia Scott. Clyde graduated from Wills Point High School in 1963, and enlisted in the US Navy where he served with honor and distinction. He met Peggy Tidwell and on Dec. 17, 1965, they were married in Wills Point. After his discharge from the Navy, he worked in Dallas at UT Dallas Machinery. Then Clyde was a firefighter for 16 years with the Richardson Fire Department. He always loved building things and in about 1981, as a side interest, Clyde owned and operated his own company, Scott Construction where his talent at project managing and designing earned him many jobs in both commercial and residential developments. Clyde loved his family and was looked up to for advice. He loved his dogs and considered them part of the family. In his spare time, Clyde enjoyed being around his many friends whether it was dove hunting, fishing or trading stories every day with his Three O’clock Group at the “Liar’s Table” where many of the world’s problems and challenges were solved. He also enjoyed gardening and was always known for helping his friends and family. Clyde is survived by his wife, Peggy Scott, of Terrell; son, Kevin Scott and wife, Jayna, of Rockwall; sister, Inez Wakefield, of Wills Point; brother, Dale Scott and wife, Evelyn, of Wills Point as well as many other nieces, nephews and too many friends to count. In lieu of flowers, Clyde’s family asks that you honor him by making a donation to the American Cancer Society at https://donate3.cancer.org/?lang=en&_ga=2.43751461.1815797731.1610667145-1381252987.1610667145. Memorials may also be made to Cheatham Memorial Methodist Church at 204 S Houston St, Edgewood, TX 75117. A Celebration of his life will be at 4:00pm, Saturday, Jan. 16, 2021 at Max Slayton Funeral Chapel.

Clyde Scott, of Terrell, passed away on Jan. 12, 2021. Clyde was born July 2, 1945 in Wills Point, TX to Forest Gilford and Catherine (Johnson) Scott, both of whom preceded him in passing along with his sisters: Joyce Cornwell, Fern Carter... View Obituary & Service Information

The family of Clyde Scott created this Life Tributes page to make it easy to share your memories.

Send flowers to the Scott family.