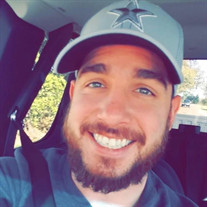 Cody Thomas Daniel went home to be with his Lord and Savior on October 28, 2021. He was loved beyond measure and will be missed more than he could have ever imagined. Cody leaves behind a great legacy of love in the form of those who loved him.... View Obituary & Service Information

The family of Cody Thomas Daniel created this Life Tributes page to make it easy to share your memories.

Cody Thomas Daniel went home to be with his Lord and Savior on...

Send flowers to the Daniel family.