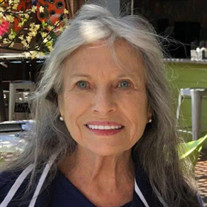 Connie Joe (Longley) Clower of Canton passed away with her family by her side on July 22, 2020 after an extended battle with liver disease. She was born August 3, 1939 to George Longley and Lillian (Grimes) Longley and grew up in East Texas, first in Tyler and later in Terrell. She joined the church at a young age and was a life-long Christian. Connie graduated from Terrell High School in 1957 and married Thomas Clower on June 3 of that year. To this union three children were born: Mark Dayne, Thomas Jr., and Traci Erin. While she pursued many different careers, she always felt that raising her children was her greatest career and achievement. Connie was also blessed with two grandchildren and two great-grandchildren. Thomas and Connie lived in Terrell until 1978. Subsequently, they resided in Gainesville, Henderson, Tyler, Mineola, and Canton. She had many careers, starting at Ranger Boot, then as a hairdresser and freelance caterer. She worked alongside her husband in various tractor businesses and later worked with a home healthcare organization as a bookkeeper. She enjoyed community service and was involved in the Mineola Chamber of Commerce for many years. Connie was known for her gentle spirit and beautiful smile. She was extremely creative, showing this through sewing, painting, and ceramics. She had a great love for cooking and used her creativity in the kitchen throughout her life. Connie was preceded in death by her parents, her son Mark Dayne, and her sister Billie. She is survived by her husband Thomas; son, Thomas Clower Jr., daughter and son-in-law, Erin and Tim Eberhart; grandchildren: Travis Eberhart and Emily Canada and her husband Ryan; two great grandchildren: Gunner Eberhart and Roan Canada. Connie is also survived by her brother and sister-in-law, Gerald and Norma Longley; sister and brother-in-law, Guylene and Robert Ballard, as well as a large extended family including many nieces and nephews. A memorial service will be held Saturday, July 25, 2020, at 3:00 pm, at Crossroads Church, 1930 South Trades Days Blvd. Canton 75103. The family asks that social distancing be observed and masks are optional but encouraged. In lieu of flowers, donations may be made to the Crossroads Church in honor of Connie’s generous heart for others.

Connie Joe (Longley) Clower of Canton passed away with her family by her side on July 22, 2020 after an extended battle with liver disease. She was born August 3, 1939 to George Longley and Lillian (Grimes) Longley and grew up in East Texas,... View Obituary & Service Information

The family of Connie Joe Clower created this Life Tributes page to make it easy to share your memories.

Connie Joe (Longley) Clower of Canton passed away with her family...

Send flowers to the Clower family.