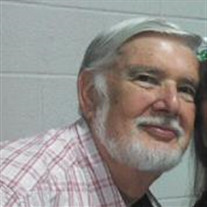 Dr. Curtis Thomas Liston, Jr., (Tom), of Kilgore, passed away March 17, 2019 in Longview while surrounded by family. Tom was born Aug. 6, 1934 in Waco, Texas to Curtis Thomas, Sr. and Mary Elizabeth Liston, both of whom preceded him in death. To say that education and helping others played tremendously important roles in Tom’s life is an understatement. He greeted every day as a day that more knowledge can be gained by himself or given to others. Always a good student, Tom attended and graduated from Texas A&M in 1956 with his Bachelor’s degree in Mathematics. In 1957, he enlisted in the Army where he served in Germany and Pakistan with honor and distinction. After his discharge, Tom returned to his academic pursuits when he enrolled in the University of North Texas and received his Masters in Counseling and Doctoral degree in Counseling/Student Services with a minor in Psychology. During his career, he taught at Dallas ISD and then began a long and distinguished partnership working as counselor, educator and, finally, Dean of Student Services at Texas State Technical College in Waco. After 38 years with TSTC, Tom retired but still felt the call to continue his own, and others’, learning by teaching math at Tyler Junior College. During his tenure, Tom helped in so many ways with so many people. His caring personality and commitment to bettering the lives of students and educators with effective counseling and goal setting enabled many to not only maintain accomplishing their goals but, in fact, he helped them reach further for higher achievements. He was the first to be called when academic and personal challenges were encountered and his sound counsel and sage advice enabled those he helped to see that these challenges could, and would, be conquered. A strong man with a wonderful selfless heart for others, Tom will be missed by all whose lives he touched. Tom is survived by his wife of 55 years, Kay Liston, of Kilgore; children: Curt Liston and wife, Renee, of Terrell, Julie Bynum and husband, Mike, of Arp, TX; grandchildren: Kayla Liston, Cody Liston and wife, Stormy, Mason Jones, and Bailey Bynum; great grandchildren: Jaylon Derrick, Antonio Judie, Kace Judie, Brennan Judie and Xander Liston; brothers: Dick Liston, Harry Liston and wife, Judy; sister, Lillian Lynch and husband, Bob, as well as nieces, nephews, extended family and a host of former students, colleagues and friends. Graveside for Tom Liston will be 1 p.m. Friday March 22, 2019 at College Mound Cemetery. A celebration of Tom's life will be held at 1:30 p.m. Friday March 22 at College Mound United Methodist Church. Family will receive friends from 5:00 p.m. to 7:00 p.m. Thursday March 21, 2019 at Max Slayton Funerals and Cremations.

Dr. Curtis Thomas Liston, Jr., (Tom), of Kilgore, passed away March 17, 2019 in Longview while surrounded by family. Tom was born Aug. 6, 1934 in Waco, Texas to Curtis Thomas, Sr. and Mary Elizabeth Liston, both of whom preceded him in death.... View Obituary & Service Information

The family of Dr. Curtis (Tom) Thomas Liston Jr. created this Life Tributes page to make it easy to share your memories.

Send flowers to the Liston family.