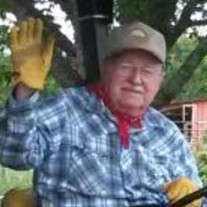 Delbert David “D.D” McGee, Sr., longtime resident of Forney, passed away on Sunday, Jan. 19, 2020. D.D. was born November 2, 1930 in Dongola, Illinois to Arthur and Grace (Bourland) McGee, both of whom preceded him in death. D.D. graduated with his bachelor’s degree from Southern Illinois University after which he enlisted in the US Air Force. While in the Air Force, he became a flight instructor during the Korean Conflict. While stationed in Waco, he met Betty Jo (Betz) Beazley and on April 20, 1956, they married. After his honorable discharge having worked his way to attain the rank of Second Lieutenant, D.D. went to work for IBM in computer sales where his honest and forthright personality enabled him to be very successful with both colleagues and customers. D.D. loved spending time on his ranch with his horses and cattle where he also raised Tennessee Walking Horses. He was a member of Saddlebags and Bums Trail Riding Club and was also a member of the American Simmental Association and American Brahman Breeders Association. D.D. had a love for his adopted hometown of Forney and he served in many civic organizations including being a charter member of the Forney Lions Club since its creation. He was also very instrumental in both the annual Forney Homecoming Parade and the North Texas Antique Tractor and Engine Club. In all these involvements though, D.D. never lost his love or aptitude for flying and he continued to be a pilot long after his service in the USAF and was even involved in teaching others to fly and earn their pilots license as well. A giving man who lived every day to the fullest making sure that family and friends knew how much he loved them by giving the “Best Hugs” to all he knew! He will always be remembered as a devoted husband, dedicated father, cherished grandfather, great grandfather, brother and friend and his legacy of unconditional love will be carried on into future generations. D.D. is survived by his beloved wife of over 63 years, “Betz” McGee of Forney; sons: Delbert David McGee, Jr. and wife, Pam, of Garland, Daniel Douglas McGee and wife, Annie, of Coco Beach, FL, and Donald Dale McGee and wife, Sherri, of Petal, MS, and Dwight Dean McGee of Forney; grandchildren: Dana Dawn Sneed and husband Damen, Leah Danielle Southard and husband, Sam, Darian McGee, Taryn McGee and Ashley Muchenberger; great grandchildren: Megan, Tori, Baylee, Kynsli, Rylee, Brynli, Jaymi and Tony; sister, Mary Imle and Frank as well as other nieces, nephews, extended family, church family and a host of friends, all near and far. A gathering of family and friends will be at 6:00pm to 8:00pm on Friday, Jan. 24, 2020 at First Baptist Church in Forney with a private interment being planned. In lieu of flowers the family asks memorials be made to Higher Ground @ First Baptist Church P.O. Box 97 Forney, Texas 75126. The family would like to extend an invitation to all of Dad’s extended family and those who knew him, all of whom shared the their love and friendship with him over the years, to a memorial service and celebration of his life that they will plan and share details of at a later date “after Mother recuperates and can celebrate with us".

The family of "D.D." McGee created this Life Tributes page to make it easy to share your memories.

Send flowers to the McGee family.