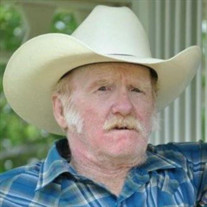 Dale Powell, of Terrell, passed away on May 10, 2021 at his home. Dale was born Dec. 26, 1948 in Scurry, Texas to Lemuel E. and Gladys Ann (Fox) Powell Jr, both of whom preceded him in death along with his siblings: Barbara Powell Meador, Vincent Patrick “Pat” Powell, Alfreda Delores “Dolly” Evans, and nephew, Johnny Ray Chancellor. Dale spent his early years in Scurry after which his family moved to Lawton, OK where he had many fond memories of growing up and the many friends he made there. Dale and his family moved to Terrell in his teenage years and he would call Terrell home for the rest of his life. He worked for Van Der Horst in Terrell for over 30 years where he was a valued asset to the company. Dale enjoyed working with his hands on anything he could repair, rebuild, or tinker with so his employment at Van Der Horst was a perfect opportunity and position. He had a great talent for mechanical devices, and he loved to make sure each small engine, car or other mechanical device performed at its optimum level. Dale loved the company and the people he worked with and his many friendships made during his career lasted his entire life. Dale married Cindy Toland and, although the marriage did not last, their friendship did. He was proud to help with her children, each of whom he considered as his, and there was nothing that Cindy or the kids needed if Dale had a say. During his life, he appreciated music and how powerful songs could be to himself and others. Dale was a self-taught musician playing the guitar so that he could help others enjoy the many tales and stories shared in song. The stories he shared in song were just a part of the stories he shared with others and Dale would often weave a tale so astounding and interesting to the ones listening only to have it end in a hilarious joke! His sense of humor was well known, and everyone realized two things upon meeting Dale-he could make you laugh and sing along! Dale was a generous man with his time, his love, and his attention. He recognized early on in life that material things did not matter as much as the people in his life and the shared experiences with each person he loved and called a friend. For those that he became close to, Dale made sure to give them a creative nickname which always made conversations even more lively!! For the last four years, Dale had lived at Terrell Senior Terraces and he was absolutely thrilled to be a part of the community. His easy smile and friendly personality made him one of the favorite residents and he was always happy to lend a hand, or an ear, to every one of his neighbors. A man with a kind and gracious heart for others, Dale will be greatly missed by all who knew him. He is survived by his brother, Bill Powell and wife Linda of Terrell; sister, Mittye Frans and husband, Billy, of Terrell; brother, Jerry Michael Powell of Quinlan; children: Joann Belcher and husband, James, of Greenville, Sandy Mejia and husband, Saul, John Thomas and wife, Fallon; grandchildren: Joshua, Andrew, Gregory, Logan, Shaun, Seth, Sarah, Ava and Harlow; nephew who thought of Dale as a dad, Elvis Lair; former wife, Cindy Toland as well as many other treasured nieces, nephews, great-nieces and -nephews, extended family and a host of friends. Funeral service for Dale will be at 3:00pm, Friday, May 21, 2021 at Max Slayton Funeral Chapel with Chaplain Dennis Hogan officiating. His family will receive friends beginning at 2:00pm to service time. Dale’s family would like to extend their deepest gratitude to the staff of American Home Healthcare Hospice, especially to his nurses, Ginger (who he nicknamed “Redneck”) and Riley, for their care, compassion and love to Dale in these last months.

Dale Powell, of Terrell, passed away on May 10, 2021 at his home. Dale was born Dec. 26, 1948 in Scurry, Texas to Lemuel E. and Gladys Ann (Fox) Powell Jr, both of whom preceded him in death along with his siblings: Barbara Powell Meador, Vincent... View Obituary & Service Information

The family of Dale Alden Powell created this Life Tributes page to make it easy to share your memories.

Send flowers to the Powell family.