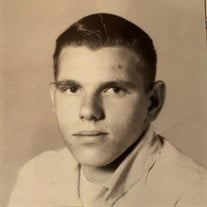 Danny Meador, of Terrell, passed away on July 29, 2021 in Dallas. He was born December 16, 1947 in Dallas. Danny was preceded in death by his parents, Edgar Leroy and Inez Elizabeth Meador, brother, John Meador and grandson, Carter David Quin.... View Obituary & Service Information

The family of Danny Meador created this Life Tributes page to make it easy to share your memories.

Send flowers to the Meador family.