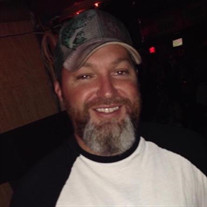 David “Big Mike” Lee Mikeals passed away Jan 3, 2019 in Dallas. He was born March 25, 1976 in East Liverpool, Ohio, the youngest son of David and Sally (Galloway) Mikeals. Big Mike enjoyed everything he could do outside especially camping, four wheeling and any time spent with friends and family outdoors was his favorite time. He had a smile that instantly made friends of others and his generosity and kindness were hallmarks of his character. He attended Forney High School and graduated in 1995 with Art Honors. Big Mike loved art and won an award for one of his paintings that hung in the state capitol. He also created the City of Forney recycling graphic that is still used today. After graduation, Big Mike attended MMI Institute in Florida as well as the Art Institute of Dallas. In Florida, he learned about the intricate designs and manufacturing of ATV engines and at the Art Institute, he further developed his artistic talents. Big Mike followed his passion for four wheelers and ATVs working as an independent designer and technician. His hard work ethic and dedication to learning everything he could about all cars gave him an excellent reputation among his colleagues and customers. He and his best friend, Jay, would often be found working on cars and planning the next get together of everyone. He enjoyed life to the fullest and lived every day knowing that he was truly blessed with loyal family and true friendships. Big Mike’s heart was as big as Texas and he will be missed by all who knew him. Those left to celebrate his legacy are his daughter, Aubrey Mikeals; son, Mason Mikeals; parents, David and Sally Mikeals; sister, Patricia Arbor; brother, Pete Arbor and wife, Pam; girlfriend, Heather Thompson as well as numerous other nieces, nephews, extended family and a host of friends, including his best friend, Jay Pinson. A Celebration of Life for Big Mike will be at 6:00 pm Wednesday January 9, 2019 at Max Slayton Funerals and Cremations. The family requests in lieu of flowers memorials be made to the Wills Point High School FFA Chapter, 1800 W. South Commerce, Wills Point, TX, 75169 in honor of his children, Aubrey and Mason Mikeals.

David &#8220;Big Mike&#8221; Lee Mikeals passed away Jan 3, 2019 in Dallas. He was born March 25, 1976 in East Liverpool, Ohio, the youngest son of David and Sally (Galloway) Mikeals. Big Mike enjoyed everything he could do outside especially... View Obituary & Service Information

The family of David "Big Mike" Lee Mikeals created this Life Tributes page to make it easy to share your memories.

Send flowers to the Mikeals family.