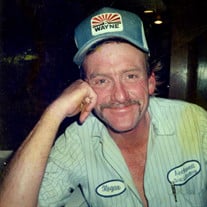 David Joe Hogan passed away September 25, 2017 in Mesquite, Tx. Born June 27, 1953 in Dallas, Tx to Clarence Durwood and Linnie Catherine Osborne Hogan, both of whom preceded him in death along with his sisters: Faye Peters and Shirley Walsh, brother, Clarence Hogan. David was also reunited with the love of his life and his soulmate, Diana Green, who passed away before him in 2015. David graduated from Mesquite High School in 1971 after which he began his lifelong career in auto repair. He loved cars and loved working with his hands and he worked for many dealerships and businesses that allowed him to serve the customer honestly and with integrity. David worked for Horn Williams Ford in Dallas, Jess Barbee Chevrolet in Terrell and Lakeside Chevrolet in Rockwall he also worked for J.W. Barrow Tire in Terrell and Rockwall Tire and Battery. In his spare time, David loved riding his motorcycles, watching NASCAR racing and football. A keen mind that stayed as active as his hands, David was always building or improving things and in the last few years, he had built a BBQ pit smoker which took several years to complete due to his continual additions and “upgrades” to make it the best it could be! David loved his family and his friends and his loyalty and love is a heritage that his family will be proud to carry forward. He leaves to cherish his memory his daughter, Misty Martinez and her husband Lalo of Houston; son; David Hogan Jr. and his wife Leilonie of Wills Point; grandchildren: Angel, Faith, Jonathon, Camaryn, Trey and Alysia; sisters: Kay Tadlock of Emory and Jane Slocum and her husband Gary of Mesquite; step children Stacy Green and Kelly Sue Baker, step grandchildren Nate, Mason, Taylor and Georgia as well as numerous other extended family and a host of friends. A Celebration of David’s life will be held 11:00 am, Saturday, September 30, 2017, at Max Slayton Funerals and Cremations.

David Joe Hogan passed away September 25, 2017 in Mesquite, Tx. Born June 27, 1953 in Dallas, Tx to Clarence Durwood and Linnie Catherine Osborne Hogan, both of whom preceded him in death along with his sisters: Faye Peters and Shirley Walsh,... View Obituary & Service Information

The family of David Hogan created this Life Tributes page to make it easy to share your memories.

Send flowers to the Hogan family.