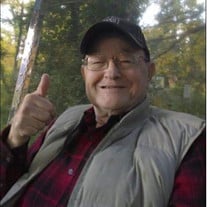 David Hale Stockslager passed away July 18, 2019 in Dallas. David was born April 1, 1943 in Marfa, Texas to David Thomas and Dorothy Juanita Stockslager, both of whom preceded him in death along with his wife, Patricia Ann Jones Stockslager, and siblings: Thomas, Michael, Allen and Anne. David grew up in Sherman, Texas and graduated from Sherman High School after which he attended East Texas Baptist University and received his Masters in Education. David coached in McKinney ISD before moving to Terrell and began working with TISD in 1985 where he worked as a teacher and coach. David’s commitment to the students and their education enabled him to enter into the administrative aspect and he served as principal at John F. Kennedy Elementary (now known as Gilbert Willie Elementary), Assistant Principal at Terrell High School and Principal at the Terrell Alternative Education Center. David had a lasting impact on so many students, all of whom he treated with respect and instilled in them a love for learning. When not influencing students’ and other teachers’ lives, David attended and was an active member of the First United Methodist church where he enjoyed singing in the choir. He also was very active in the Terrell Kiwanis Club helping the entire community with service projects dedicated to enhancing lives. David genuinely loved people and after retirement, he could be found many places around town performing karaoke or playing bridge with friends. He is survived by his children: Eric Stockslager, Chad Stockslager and Anna Goolsby along with several nieces, nephews, other relatives and a host of friends who will miss him greatly. A Celebration of David’s life will be 2:00 pm, Saturday, July 27, 2019, at the First United Methodist Church, 503 W. College St., Terrell, Tx 75160. In lieu of flowers, memorials may be made to First United Methodist Church Choir.

David Hale Stockslager passed away July 18, 2019 in Dallas. David was born April 1, 1943 in Marfa, Texas to David Thomas and Dorothy Juanita Stockslager, both of whom preceded him in death along with his wife, Patricia Ann Jones Stockslager,... View Obituary & Service Information

The family of David H. Stockslager created this Life Tributes page to make it easy to share your memories.

Send flowers to the Stockslager family.