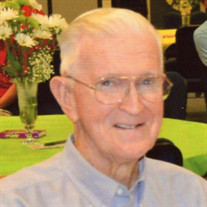 David Eugene Townsend, a lifelong resident of Forney, passed away peacefully on August 5, 2021. David was born May 28, 1932 in Forney, Tx. to James Columbus and Ettie Mae (Nash) Townsend, and was the youngest of nine children. David met the love of his life, Vera Dephine (Dean) Hendon, and they were married Oct. 15, 1952. A devoted husband, he and Dean were faithful members of First Baptist Church of Forney, where both were active in the “Believers” class. They were happily married for 63 years, prior to Dean’s passing in 2016. Preceding David in death also are his parents, five sisters and three brothers. After serving our country in the U.S. Army, David began his plumbing career, working for companies in the Dallas area, before becoming self-employed and serving the local community. He was a “productive” deer hunter, a masterful wing-shooter who loved to hunt quail with his brother, Jack, and their bird dogs. He opted for bass fishing later in life, and he and Dean spent many springs with friends at Sam Rayburn. The fish fries on Saturdays were abundant and always memorable. David also had a propensity (and the ability) for pranking friends and relatives, all in good fun. David and Dean were wonderful hosts, and made their home available to any relative or friend needing a bed and breakfast during a visit to Forney. David leaves numerous nieces and nephews, great and great-great nieces and nephews, as well as a host of friends. In lieu of flowers David's family asks that donations be made to Hillcrest Cemetery Association, P.O. Box 1033, Forney, Tx. 75126 in David's memory. Funeral service for David will be 11 a.m. Tuesday, August 10, 2021 in the chapel at First Baptist Church Forney. Interment will follow the service at Hillcrest Cemetery in Forney. David's family will receive friends 6 p.m. to 8 p.m. Monday, August 9, 2021 in the Forum at First Baptist Forney.

David Eugene Townsend, a lifelong resident of Forney, passed away peacefully on August 5, 2021. David was born May 28, 1932 in Forney, Tx. to James Columbus and Ettie Mae (Nash) Townsend, and was the youngest of nine children. David met... View Obituary & Service Information

The family of David Eugene Townsend created this Life Tributes page to make it easy to share your memories.

Send flowers to the Townsend family.