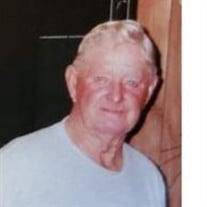 David “Dee” Russell Vann of Hiram Community passed away peacefully on November 4, 2020. David was born in Quinlan, Tx on December 2, 1927 to William Oscar and Cleo Bell (Ketner) Vann, both of whom met him in Heaven along with his former wife and mother of his children, Ruth Vann, two sons: William Ray and Stephen, his second wife Polly Vann who brought him happiness in his later years, granddaughter Rachel, great grandson Jason, brothers: Wesley, James, L.O. and Alvin and sisters Nellie Swinford and Bonnie Turner. Growing up in a small town during the Depression Era, David learned what really mattered, family first and being a man of his word second. He joined the Army in 1946 and was sent to Korea by ship in the middle of the Pacific typhoon season. It took 18 days, some of those in stormy weather to get to Korea. David and his fellow soldiers became very sea sick during rough seas. He was thankful to be positioned in the ‘crowsnest” of the ship and not in the mix of all those seasick soldiers on the deck. After that incident he stayed away from boats the rest of his life. He was honorably discharged from the army in 1947. He farmed briefly and then began his lifelong career in the construction business with his brother Wesley and two cousins. He was a quiet man with a gentle smile and a reputation for honesty and integrity. David is survived by his children: Kathy Vann of Kaufman, Peggy Smith and Rick of Nacogdoches, Bobby Vann and Patricia of Hiram and Gary Vann of Kaufman ; Grandchildren: April, Hunter, Leslie, Chrystal, Brittany, Katie, Melanie, Holly and Josh. Great grandchildren: Layla, Jack, Hadley, Kaleb, Iris, June, Jacob and Adalynn. Siblings: Nora Lewis, Coman Vann, Earnest Vann and Sue Sizemore as well as numerous nieces, nephews, extended family and a host of friends. A celebration of David’s life will be at 2:00pm Monday, November 9, 2020 at Max Slayton Funeral Chapel with military honors.

David &#8220;Dee&#8221; Russell Vann of Hiram Community passed away peacefully on November 4, 2020. David was born in Quinlan, Tx on December 2, 1927 to William Oscar and Cleo Bell (Ketner) Vann, both of whom met him in Heaven along with his... View Obituary & Service Information

The family of David Vann created this Life Tributes page to make it easy to share your memories.

Send flowers to the Vann family.