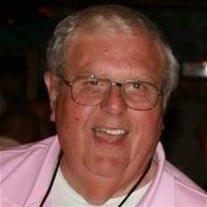 David L. Yandell, longtime resident of Forney, passed away peacefully with his family by his side on August 25, 2017. David was born June 10, 1936 in Dallas to Lonzo and Virginia (Crawford) Yandell, both of whom preceded him in death and welcomed him into Heaven. David, a life long resident of Forney, graduated from Forney HS in 1954. On June 17, 1955, he married the love of his life, Joanne Marshburn, and together they created a wonderful life filled with family memories and treasured friendships. David, active in the HVAC industry, owned and operated several HVAC contracting companies, including Dave Yandell Mechanical, was a Carrier AC dealer for 40 years, and served as an officer with the Dallas chapter of Texas Air Conditioner Contractors Assn. His heart for others inspired him to serve as deacon with First Baptist Church of Forney where he was a longtime member. As a leader in the community, David served in many civic roles including being elected Mayor for 3 terms, City Councilman, FISD School Board Member and Member of the Planning and Zoning Commission. As much as he appreciated making his home town a better place, David’s first priority was his family. He was a devoted husband to Joanne and a loving, supportive father to his two daughters. Later, he considered himself to have the ultimate blessing by being “Daddo” to his beloved grandchildren and great grandchildren. His pastimes included traveling, showing vintage cars and attending stock car and drag boat racing. David lived life to the fullest, showing his family how to get the most out of life. Strong in his faith, love for his family and commitment to others, David leaves a heritage of honor, love and genuineness that his family will continue to carry forward into future generations. David leaves to cherish his legacy his beloved wife of over 62 years, Joanne Yandell of Forney; daughters: Sherri Ansley and husband, Randy, Lisa Couch and husband, Bruce, all of Forney; grandchildren: Brandon Couch and wife, Jenifer, Paige Hurley and husband, Clint, Jason Ansley and wife, Melissa and Kelli Ansley; great grandchildren: Madison, Caleb and Kendall Couch, Hudson Cantrell, Harrison Hurley and Levi Lovato; brother, Walter Yandell and wife, Jeannie, of Forney; niece, Leanna Baldwin; nephew, Kevin Yandell; mother-in-law, Maggie Marshburn as well as other extended family, church family and a host of friends. Funeral services for David Yandell will be 2 p.m. Tuesday August 29, 2017 at First Baptist Church, Forney with family receiving friends at 1 p.m. one hour prior to service with a reception to follow the service. Interment will follow the reception at Hillcrest Cemetery in Forney.

David L. Yandell, longtime resident of Forney, passed away peacefully with his family by his side on August 25, 2017. David was born June 10, 1936 in Dallas to Lonzo and Virginia (Crawford) Yandell, both of whom preceded him in death and welcomed... View Obituary & Service Information

The family of David "Dave" Yandell created this Life Tributes page to make it easy to share your memories.

Send flowers to the Yandell family.