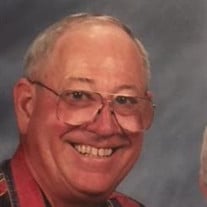 Don Adams Strickland, lifetime resident of the Terrell area, passed away on October 16, 2018 peacefully at his home. Don was born September 10, 1938 in Terrell to James Randall and Ola Pauline (Adams) Strickland. He was preceded in death by his parents, his half-brother, Fred Strickland and his infant twin son and daughter, James and Jamie Strickland. Don grew up in the Poetry area and started school at Poetry Elementary at the age of 5 before moving to the schools in Terrell. He continued his education in Terrell and graduated Terrell High School in 1956. He met the love of his life, Linda Hendricks and in 1962, they were married at Poetry Baptist Church. Together, Don and Linda, known as Tiddle, were blessed to create a lifetime of memories with their children, their friends and each other. Don was a veteran and served in the US Navy and was honorably discharged. In 1965, he graduated from East Texas State University after which he began working for Ford until his retirement in 1988. Don was a member of First Baptist Church of Terrell and was a member of Hella Temple. He was an active member with the Masons at both Artesia Lodge #406 and Prairieville Lodge #253. Don spent his whole life living on his family’s farm and he enjoyed sharing the history of how Poetry, and Terrell, had changed in his lifetime. His father, James, was the ‘self-appointed’ Mayor of Poetry and upon his father’s passing, Don willingly took over this “public” office! He had a great sense of humor and every conversation started with a big hug and ended with laughter. Don had a smile that could light up a room and his ability to be the best story teller endeared him to everyone he met. His unique talent for being kind yet always truthful will be greatly missed. Don is survived by his wife, Linda (Tiddle) Strickland, of Terrell; son, Randy Strickland and wife, Dana, of Huron, OH; daughter, Donalyn Sherer-Lambert and husband, Don, of Rockwall; grandchildren: Riley, Cade, Reid, and Katie; as well as several extended family members and a host of friends. Graveside service will be at 10:00am, Monday, October 22, 2018 at Highland Memorial Gardens. The family will receive friends 2:00pm to 4:00pm, Sunday, Oct. 21, 2018 at Max Slayton Funerals and Cremations. In lieu of flowers, the family asks that memorials in Don's honor may be made to Shriners Hospital for Children at www.shrinershospialsforchildren.org or to the charity of one's choice.

Don Adams Strickland, lifetime resident of the Terrell area, passed away on October 16, 2018 peacefully at his home. Don was born September 10, 1938 in Terrell to James Randall and Ola Pauline (Adams) Strickland. He was preceded in death by... View Obituary & Service Information

The family of Don Strickland created this Life Tributes page to make it easy to share your memories.

Send flowers to the Strickland family.