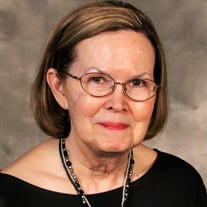 Dorothy Ann Calverley passed away peacefully on Friday, March 15, 2019 at T. Boone Pickens Hospice and Palliative Care Center in Dallas, Texas surrounded by loved ones. She was born November 20, 1944 in Dallas to the late Haskell Wade and Exie Mae Roberts. Dorothy was the only daughter of four children and was pampered and doted by her three brothers, especially her oldest brother Jackie, who was even known to take her along on a date or two. Dorothy attended Wilmer Hutchins High School in Dallas and held many prestigious job titles in her work field afterwards. She was the first female Advertising Director of Titche’s, downtown Dallas, which also earned her a nomination for the 1975 Matrix Awards for Women in Communications. Ten years later she was named Vice President of a very large and successful Advertising Agency in Dallas known as Crume & Associates, later known as Vergati & Associates. After years in the advertising field, she went into the printing industry and, once again, was a plant manager for one of Dallas’ major printing companies and eventually was part owner of a printing company. After retiring, her most rewarding job was working at the Share Center in Terrell, serving and helping others. Although she held many titles, her favorite, and most loved one, was that of MOMMA and NANA. Dorothy was a devout Christian and during her endurance of over two decades of struggles with pain and chronic illnesses, she never once complained or asked “why me?”. Her faith NEVER wavered, even up to the last few days of her life. She was truly a fighter with the strongest determination. She enjoyed her family, especially time with the grandchildren and babies, reading her Bible, going to church, and playing dominos with her sweet church friends. Dorothy will be remembered for her sweet and caring soul and a smile that brightened any room and lifted your spirits. Dorothy is survived by her children: Stacy Lee Stephens & wife Brenda, Regina Gail (Stephens) Calverley and husband Mark, and Keith Wayne Stephens and wife Nicki; her brother, Jackie Roberts and wife Donna; ten grandchildren, 15 great grandchildren and numerous nieces and nephews, many extended relatives, and an amazing church family, all of whom loved Dorothy greatly and will miss her dearly. The family would like to thank Rockwall & Brin Church of Christ, T. Boone Pickens Hospice & Palliative Care Center and a host of family and friends for the many prayers, love, support and care given to Dorothy. Family, friends, and others whose lives Dorothy touched are invited for visitation at Max Slayton Funeral and Cremations, 642 N. Rockwall Ave., Terrell from 5:00pm to 7:00pm, Wednesday, March 20, 2019 and for her celebration of life and service to others at 2:00pm, Thursday, March 21, 2019 at Rockwall & Brin Church of Christ, 407 N Rockwall Ave, Terrell. Interment will follow at Highland Memorial Gardens in Terrell. The family requests that in lieu of flowers, and in memory of Dorothy's legacy, please make donations to Terrell Share Center, 103 Jones Street, Terrell, TX 75160.

Dorothy Ann Calverley passed away peacefully on Friday, March 15, 2019 at T. Boone Pickens Hospice and Palliative Care Center in Dallas, Texas surrounded by loved ones. She was born November 20, 1944 in Dallas to the late Haskell Wade and... View Obituary & Service Information

The family of Dorothy Ann Calverley created this Life Tributes page to make it easy to share your memories.

Send flowers to the Calverley family.