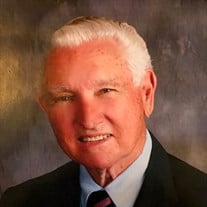 Early Douglas Lane, Jr. passed away into the presence of his Lord peacefully on January 29, 2019 at home surrounded by loved ones. Doug was born Sept. 5, 1926 in Terrell to Dr. E. D. Lane and Hester Naomi Buffington Lane, both of whom met him in Heaven along with his sister, Billie Jo Rash and brother-in-law, Clark Griffith. Doug grew up in Terrell and attended Terrell schools. After starring for the Terrell Tigers football team during his senior year of high school, Doug enlisted in the Navy serving as a Pharmacist Mate during World War II. Upon commencement of the war Doug received an honorable discharge from the service and entered East Texas State University, now known as Texas A&M-Commerce. In September 1947, he married Doris Swords in his home church, First Christian Church, and they continued their education with both graduating in 1950. Doug received his B.S. in Agriculture and, later, his M.S. in Education from East Texas State University. After graduation, Doug and Doris both taught school in Ft. Worth before moving back to Terrell to continue their careers in education. In 1960, they moved to their ranch and Doug continued as Middle School Principal until his retirement. His career with Terrell ISD spanned over 20 years as both teacher and administrator. Doug served on the Board of Directors for Terrell State Bank and Farmers Electric Cooperative. Doug was a longtime and faithful member of First Christian church serving as an elder and Board Chairman. Doug’s joy came from being married to the love of his life, Doris, for 71 years, and their sons and grandchildren. Those left to cherish his legacy are his wife, Doris Lane; sons: Ken Lane and wife Lisa, Larry Lane and wife Teri, Kelly Lane and wife Lisa and Kirk Lane; six grandchildren: Katie, Kelsie, Josh, Gabby, Logan, and Cason; sister, Nancy Griffith Lambeth and her husband Paul, as well as numerous nieces, nephews, and friends. Funeral service for Doug Lane will be Friday, February 1st at 11:00 a.m. at the First Christian Church in Terrell with interment to follow at Oakland Memorial Park. His family will receive friends Thursday, January 31st 4:00-7:00 p.m. at Max Slayton Funerals and Cremations. In lieu of flowers, the family requests donations be made to the First Christian Church Maintenance Fund at 405 N. Adelaide, Terrell, Texas 75160.

Early Douglas Lane, Jr. passed away into the presence of his Lord peacefully on January 29, 2019 at home surrounded by loved ones. Doug was born Sept. 5, 1926 in Terrell to Dr. E. D. Lane and Hester Naomi Buffington Lane, both of whom met him... View Obituary & Service Information

The family of Doug Lane created this Life Tributes page to make it easy to share your memories.

Early Douglas Lane, Jr. passed away into the presence of his...

Send flowers to the Lane family.