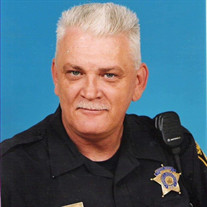 Not sure what to send?

Dwaine Morris Crain, of Terrell, passed away on June 14, 2022 at his home with family at his side. Dwaine was born December 23, 1948 in Houston, TX to Darwood and Deloris Crain, both of whom preceded him in death along with his brother, Ricky and sister, Sandra. Dwaine grew up in Houston and Palestine, eventually moving to Mesquite, where he graduated from Mesquite High School. He then enlisted into the Navy serving honorably during the Vietnam war. He then served with the Texas National Guard for many years with continued exemplary service to this great state that he loved so much. Dwaine began his career with law enforcement with the Dallas County Sheriffs Office and he rose to the rank of Senior Patrol Officer until his retirement after 32 years. His ability to connect with the growing communities of the Dallas area as well as his commitment to public safety made him a respected peer with his brothers in blue. He was an accomplished marksman and was a firearms instructor for the SO for many years with many seasoned officers as well as new recruits. When he wasn’t on duty, Dwaine enjoyed playing dominos, woodworking, playing video games and traveling. Dwaine didn’t have a specific favorite place, he just believed it was “about the journey, not the destination!” Dwaine’s other well known talent was for corny, funny Dad-jokes that always got an eyeroll AND a chuckle. He was known as the “King of One Liners” and he never missed an opportunity to share his unique brand of humor so a laugh could be shared and, most importantly, a memory to be created and forever cherished. A great dad, an awesome grandfather, steadfast peacekeeper and faithful friend, Dwaine will be greatly missed by all who knew him. He leaves his memory to be carried on by his children: Denise Crain of Tool, TX, Mike Crain and wife, Ashley, of Terrell, TX and Brandi Jennings and husband, Brian, of Spring, TX; grandchildren: Gage, Ava, Daniel, Riggin, Olivia, Graham and Audrey and his beloved fur babies, Fred and Molly (also known as Chop-Chop) along with nieces, nephews, extended family, his law enforcement family and a host of friends. Funeral service will be at 11:00am, Monday, July 11, 2022 at Max Slayton Funeral Chapel with interment to follow at Dallas/Ft. Worth National Cemetery. His family will receive friends beginning at 10:00am to service time. For those wishing, memorials may also be made to: Kaufman County Veteran’s Park, 3900 Washington Ave, Kaufman, TX, 75142.

Dwaine Morris Crain, of Terrell, passed away on June 14, 2022 at his home with family at his side. Dwaine was born December 23, 1948 in Houston, TX to Darwood and Deloris Crain, both of whom preceded him in death along with his brother, Ricky... View Obituary & Service Information

The family of Dwaine Morris Crain created this Life Tributes page to make it easy to share your memories.