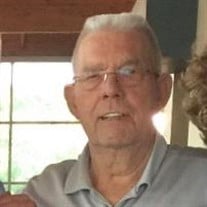 Earl Ray Miller, longtime resident of Terrell, Texas, passed away on April 30, 2019 with family by his side. Earl was born December 17, 1941 in Grayville, Illinois to Robert and Frances (Weeden) Miller. He was met in Heaven by his parents and sister, Helen Moore and brother-in-law, J.K. Moore. In 1950, Earl moved to Terrell where he made an immediate impact on many lives. His wonderful sense of humor and ever-present smile made an instant friend of all who met him. He was an outstanding athlete playing in many sports including football, basketball, track, and baseball. Earl graduated THS in 1961 and then attended Navarro Junior College in Corsicana, Tx on a football scholarship. During senior year, he began dating the love of his life, Louise Roberts, and they married on Aug. 29, 1963 and made their home in Terrell. Earl and Louise were devoted to each other and to their daughters and were familiar faces in the community. He began his 40 year career as a Sales Representative with Lang Manufacturing and then Murphy Cedar. His cheerful personality combined with his thoughtful honesty earned him many loyal customers as he traveled over the state of Texas. He and Louise were also very active and longtime members of Emmanuel Baptist Church where Earl served as a Deacon for 25 years. Earl felt strongly called to serving the youth of the church and community and his Godly example of daily living and faith as well as the genuine care and interest he showed to students made an eternal impact in many of the students’ lives. Earl believed that every young person having a firm foundation by serving the Lord in faith would ensure success both here and, later, in Heaven and many adults still remember the impact Earl had on their lives. In 1997, Earl was inducted into the Terrell Tiger Athletic Hall of Fame recognizing his athletic achievements in high school and for his civic character after graduation. A man who will be remembered for his integrity and unconditional love, Earl will be missed by his family, friends and all who met him. Earl leaves to cherish his memory his beloved wife of 55 years, Louise Miller; daughters: Daphne Miller Woodward, Deena King and her husband, Philip King; grandchildren: Brandon Hermann, Blayce Miller Woodward, Tanner Ray Miller Woodward, and Riley Miller Woodward; sister, Barbara West and husband, William; brother, Bob Miller and wife, Charliene, as well as nieces and nephews, extended family, church family and a host of friends. Funeral service for Earl Miller will be 2 pm Saturday May 4, 2019 at Max Slayton Funeral Chapel with interment to follow at Oakland Memorial Park. Family will receive friends 5 pm to 7 pm Friday May 3 at Max Slayton Funerals and Cremations. For those wishing and in honor of Earl’s commitment to church youth, donations may be made to First Baptist Church Youth-Resurgence, 403 N. Catherine, Terrell, Texas.

Earl Ray Miller, longtime resident of Terrell, Texas, passed away on April 30, 2019 with family by his side. Earl was born December 17, 1941 in Grayville, Illinois to Robert and Frances (Weeden) Miller. He was met in Heaven by his parents... View Obituary & Service Information

The family of Earl Ray Miller created this Life Tributes page to make it easy to share your memories.