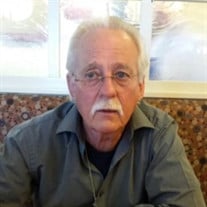 Earl Ray Reynolds of Terrell passed away February 6, 2021 at his home. He was born May 4, 1948 in Dallas to the late Woodrow Wilson and Faye Byram Reynolds. Earl Ray lived in Dallas throughout his childhood, he attended and graduated W.W. Samuel high school. Immediately following graduation Earl Ray was drafted into the Army and would eventually go on to serve in the Vietnam War. Earl Ray married the love of his life Donna Penny on February 14, 1995 and later they moved to the Terrell area in 1999 where they built their home together. They attended College Mound United Methodist Church where Earl Ray’s membership stood until his passing. Earl Ray worked in construction for many years, his stint in the military and his passion for working with his hands and helping others led him in building schools. He loved to collect knives and guns and could talk about both for hours. After his time in construction Earl Ray began working at American National Bank where he would eventually retire. Earl had a passion for cooking and in his spare time he was perfecting his skills, also sharing his enthusiasm with his son. Earl Ray enjoyed spending time with his family and was always there to lend a listening ear or make a delicious meal. He will be missed by everyone. Earl Ray was preceded in death by his parents and brother, Joe Reynolds. Earl Ray leaves his love and recipes to his wife, Donna Reynolds, of Terrell; children: Tara Brungardt and husband Travis of Prairie Village, Ks., Ryan Reynolds of Kansas City, Mo., Brad Jones and wife M’Leigha of Keller; grandchildren: Grey and Sally Brungardt, Mae Reynolds, Ryan and Reagan Jones; brother, Ron Reynolds and wife Mary of Lindale; sister, Sharon Byrn of Mesquite as well as numerous nieces, nephews, other relatives and a host of friends who will all miss Earl Ray. Memorials may be made to Adopt-A-Block Ministries 203 Main St. Terrell, Tx 75160 in Earl Ray’s honor. Funeral service will be 11:00 a.m. Saturday February 13, 2021 at College Mound United Methodist Church 14490 FM 429 Terrell, Tx 75161 with interment to follow at Smyrna Cemetery in Emory at 3:00 p.m. Family will receive friends Friday February 12, 2021 from 5:00 pm to 8:00 pm at Max Slayton Funerals and Cremations.

Earl Ray Reynolds of Terrell passed away February 6, 2021 at his home. He was born May 4, 1948 in Dallas to the late Woodrow Wilson and Faye Byram Reynolds. Earl Ray lived in Dallas throughout his childhood, he attended and graduated W.W. Samuel... View Obituary & Service Information

The family of Earl Ray Reynolds created this Life Tributes page to make it easy to share your memories.

Send flowers to the Reynolds family.