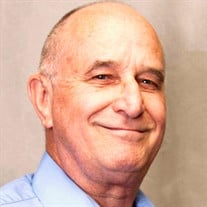 Ed McCamey, of Wills Point, passed away on the evening of November 16, 2017. Ed was born August 19, 1946 in Bethesda, MD to Clifford and Phyllis (Aldrich) McCamey, both of whom preceded him in death. Ed grew up in the Dallas area and was a 1964 graduate of Bryan Adams High School and graduated from UT-Dallas with a degree in anthropology. He served honorably in the US Army having been stationed in Europe and achieving the rank of Captain. He was a member of the Toastmasters International for over 46 years as well as Southwest LiveSteam. Ed was a longtime and very active member of Good Shepherd Episcopal Church in Terrell where his devotion to his Lord was evident in his service to the church serving on the Vestry as Senior Warden. He had a love of life and was known for his many and varied interests and hobbies with a special fondness for model trains. Ed also traveled abroad doing research for the National Science Foundation in places like Nepal and South America where he demonstrated and increased his knowledge of anthropology as he studied primitive cultures and their ways of life. Believing that each day was a gift from the Lord and a chance to learn more, Ed leaves a legacy of unconditional love for his family that they will treasure always until they are reunited again. Ed is survived by his wife, Helen McCamey of Wills Point; children: Heather McCamey of New Orleans, Michael McCamey of Dallas; step-children: Tiffany Bates-Stroud of Quinlan, Derek Bates of Durango, CO, Terri Antwine of Farmington, AR, Amanda Dunklin of Brownsboro, Elvie Carpenter of Pittsburg, TX and Russell Carpenter of Pittsburg, TX; grandchildren: Alexa McCamey, Christopher Bates, Carley and Clayton Antwine, Keagan, Braxton, Bixley, Kipton, and Afton Carpenter; Cooper and Garrett Dunklin, Gracie, Makynlee, Holden, Hattie and Corbin Carpenter, Maria Savilla, Kira Anthony, Sapphira Fellihkatubbee and Kieran Riley; brother, Clayton McCamey and wife, Kimberly; sister, Carolyn McCamey; nieces: Katie Richmond-McCamey and Olivia Linn; great niece, London McCamey as well as other extended family and a host of friends. A Celebration of Ed’s life will be 10 am Saturday November 25, 2017 at The Episcopal Church of the Good Sheperd. Memorials in honor of Ed’s service may be made to the Episcopal Church of the Good Shepherd, 200 W. College St., Terrell, TX, 75160.

Ed McCamey, of Wills Point, passed away on the evening of November 16, 2017. Ed was born August 19, 1946 in Bethesda, MD to Clifford and Phyllis (Aldrich) McCamey, both of whom preceded him in death. Ed grew up in the Dallas area and was... View Obituary & Service Information

The family of Edward McCamey created this Life Tributes page to make it easy to share your memories.

Ed McCamey, of Wills Point, passed away on the evening of November...

Send flowers to the McCamey family.