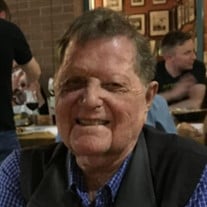 Edwin Doyle Spurlin passed away on August 28, 2018. He was born to Marie and Doyle Spurlin on August 22, 1945 in Cleburne, Tx. He attended Cleburne Schools and graduated from UTA with a degree in engineering. He worked for Dallas Power and Light and Texas Power and Light in Decatur and eventually moved to Terrell. Edwin was married to Grace and together they had two sons: Ed, Jr. and Neil Spurlin. He worked for TXU, DPL and Oncor before retiring after 40 years in the industry. In 1988, he married Carol Arnold and together they owned and operated Creative Florist in Terrell for many years. Retiring once more, Edwin and Carol sold the floral shop and moved to their weekend home in Lake Fork. Despite a lifetime of health issues, Edwin enjoyed his fishing, Scotch, and travel. He cherished his time with family and friends and lived a full life. A man of few words and quick wit, he was always ready to help anyone at a moment’s notice with whatever they needed from computers to sprinklers and everything in between. Edwin is survived by his wife, Carol Spurlin; sons: Ed Spurlin, Jr. and wife, Leticia and Neil Spurlin and wife, Catherine; grandsons: William, Nicklaus, and Matthew; brothers: Ogden Spurlin and wife, Virginia, and Bobby Spurlin and wife, Jo, as well as nieces, nephews, extended family and a host of friends. Edwin lived his life as if he was invincible and, in many ways, he was. He will be sorely missed as he held a special place in so many lives. A celebration of Edwin’s life will be at 11:00am, Monday, Sept. 3, 2018 at Max Slayton Funeral Chapel with the family receiving friends beginning at 10:00am to service time. In lieu of flowers, the family has asked that memorials be made in honor of Edwin to the Skin Cancer Foundation at www.skincancer.org or to the National Kidney Foundation for kidney transplant support at www.kidney.org.

Edwin Doyle Spurlin passed away on August 28, 2018. He was born to Marie and Doyle Spurlin on August 22, 1945 in Cleburne, Tx. He attended Cleburne Schools and graduated from UTA with a degree in engineering. He worked for Dallas Power... View Obituary & Service Information

The family of Edwin Spurlin created this Life Tributes page to make it easy to share your memories.

Send flowers to the Spurlin family.