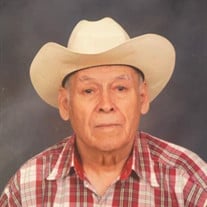 Elias Lira Rivera passed away peacefully, with family by his side, on March 30, 2022, in Dallas, Texas. Elias was born in Zaragoza, Mexico to Santiago Lira and Juana Rivera on July 20, 1932 and moved to Texas when he was around twelve years old. He was preceded in death by his dear wife, Maria Rivera, son Lucio “Milo” Rivera, his sister, four brothers and his sister-in-law Pilar Perez. Elias was well known as a ranch hand, ranch foreman and eventually a rancher. He is also known for his many years of service to the Forney community. Elias and Maria were married on December 7,1963 and after some years in West Texas settled their family in the Forney community in 1972. Elias was also known for his excellent horsemanship and his AI skill in breeding cattle, specially Charolais and Limousin. He worked for several ranches such as Floyd J. Ridley in Barnhart Tx & J.E. Hamblen Ranch of Forney TX as well as his own ranch. When Elias was not in the saddle on the ranch, he was busy in the community serving others. He was active in Forney’s FFA, 4H Club, Forney Parent’s and Friends and the many projects for the Forney Beautification Committee. Elias was a faithful Catholic man and follower of Christ. He had a warm heart and had so much compassion for others. He was always willing to feed and shelter those in need. His nature was one to always help and teach others with wisdom and his experiences. The lives impacted by his generosity are countless. Elias is survived by his children from his second marriage are Juanita L. Rivera & Victor Flores, Santiago L. & Heidy Rivera, Cesareo L. & Belinda Rivera, Elias Jr. & Crystal Rivera, Oscar Rivera, Brother in law Enrique Perez, niece Paula Perez, family friend Jurgen Hubert and children from first marriage Juana Lira de Castro & Norberto Sanchez, Elias & Lucy Lira, and Jorge & Irma Lira. He was not only a beloved father to those named but an uncle, grandfather, great-grandfather, and friend whose memory will be cherished. A Mass of Christian burial will be held on April 6, 2022, at 2 PM at St. Michael the Archangel Catholic Church in Garland with burial to follow at Hillcrest Cemetery in Forney. The family will receive friends and those wishing to extend their condolences Tuesday April 5, from 5 p.m. – 7 p.m. at Max Slayton Funeral Chapel in Terrell, Texas. A Recitation of Rosary will be delivered at 7 p.m. on Tuesday, April 5 following the visitation at Max Slayton Funeral Chapel.

Elias Lira Rivera passed away peacefully, with family by his side, on March 30, 2022, in Dallas, Texas. Elias was born in Zaragoza, Mexico to Santiago Lira and Juana Rivera on July 20, 1932 and moved to Texas when he was around twelve years... View Obituary & Service Information

The family of Elias Lira Rivera created this Life Tributes page to make it easy to share your memories.

Elias Lira Rivera passed away peacefully, with family by his...

Send flowers to the Rivera family.